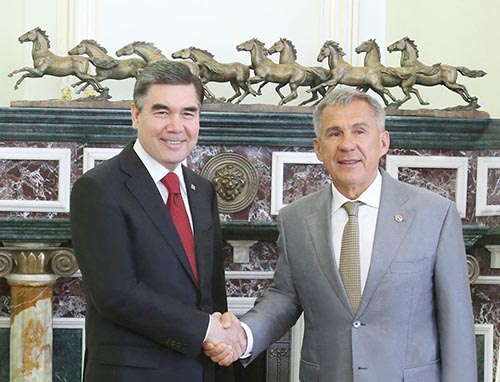 On February 17th Turkmenistan’s new Minister of Industry and Construction Operations paid a visit to the capital of the Republic of Tatarstan, part of the Russian Federation. This in itself should not deserve more than a succinct press release. However that minister was no other than Serdar Berdymukhamedov, son of Turkmenistan’s president, and this trip to Kazan was part of his first foreign tour after just over a week in the job.

It is not the first time that Serdar Berdymukhamedov pays a visit to Tatarstan. Back in 2017 he headed to Kazan to attend an economic summit and meet with the region’s president, Rustam Minnikhanov. Officially, Serdar went to Tatarstan in his role as head of the legislative committee of the Turkmen parliament, but it was hard to believe that in such a capacity he met with Minnikhanov. What happened in 2017 was the introduction of Serdar Berdymukhamedov to the remarkable recurrent and lasting relationship between Turkmenistan and Tatarstan.

While other Central Asian presidents have been in Tatarstan, mostly as a stopover on their way to or from Moscow, the number and frequency of meetings between President Gurbanguly Berdymukhamedov and his Tatar colleague Minnikhanov have been surprisingly common. Since 2008, when Minnikhanov was then Prime Minister of Tatarstan, both have met every single year, with the Tatar visiting Ashgabat or Berdymukhamedov, who normally avoids foreign trips, going to Kazan. The Turkmen president is by now very familiar with the sights in the Tatar capital, having visited at least twice its Kremlin, a historic citadel and a UNESCO World Heritage Site, in 2012 and 2019. In addition, their subordinates have celebrated so far up to six meetings of a joint Tatarstan-Turkmenistan working group to discuss trade, economic, scientific, technology, and cultural cooperation.

It would be not extraordinary for Berdymukhamedov to meet regularly with his Central Asian counterparts, Russia’s Vladimir Putin or China’s Xi Jinping, countries with which Turkmenistan has much closer ties. But the fact that he has such regular interviews with the ruler of a federal republic of the Russian Federation, in many cases more often than with those countries mentioned above, raises the following question: what is the reason behind the high frequency of such encounters?

On paper, there is nothing extraordinary in the relationship between Turkmenistan and Tatarstan that justifies the number of reciprocal visits by their rulers. Geographically, Kazan is thousands of kilometres away from Ashgabat, almost as far as Moscow. In cultural terms, Turkmen and Tatars share a common Turkic background and there is a small Tatar minority in Turkmenistan, but this is also a common feature in Kazakhstan, Kyrgyzstan and Uzbekistan. In economic terms the figures are far from impressive, with the foreign trade turnover between both parties reaching $65 million in the first nine months of 2019, significantly more than the $24 million for the whole of 2018 but still minimal.

Officially, after the interviews a number of pleasant words wishing for closer ties are exchanged, memoranda are signed and plans are laid out for future encounters. As a result, a number of symbolic gestures are achieved like a memorandum of cooperation with Innopolis University signed during Serdar Berdymukhademov’s trip, the opening of a Turkmen consulate in Kazan in 2019, the introduction of direct flights between Ashgabat and Kazan by Turkmenistan Airlines in 2016 and regular cultural exchange events.

In more practical terms, Turkmenistan has benefitted from a number of Tatarstan-based companies, notably Tatneft, an oil company that provides repairs and equipment for the Goturdepe oil field, KER-Holding, for the overhaul of its gas turbines, and Kamaz, a truck company that already has around 10,000 vehicles reportedly operating in Turkmenistan. Nevertheless, in quantitative terms these success stories are not that significant and do not uphold the Tartar-Turkmen connection. For instance, Tatneft’s 7-year deal (2010-2017) was worth a mere $32 million.

The question remains unanswered. What is the reason behind the frequency of the Berdymukhamedov-Minnikhanov encounters? Cultural and economic ties cannot sustain it so the answer must lie somewhere else. A simple explanation is that there is just a good personal relationship between both presidents, despite Berdymukhamedov not being known for his open personality, and therefore they would just be cultivating it. However, this is not entirely convincing so one must scratch the surface to find what might be lying deeper. Unsurprisingly, the familiar face of Vladimir Putin starts to emerge.

Rustam Minnikhanov has been President of the Republic of Tatarstan since 2010 and before that he was the region’s Prime Minister for 12 years. As his long career in the Tatar administration suggests, his loyalty to Putin is unquestionable. Therefore it is not unreasonable to think that Minnikhanov might be following the Kremlin’s orders and playing the role of middleman between both presidents.

It would not be the first time a Russian ruler uses Tatars to act as intermediary in his relationship with Central Asia. Given the cultural, linguistic and religious similarities between the Tatars and their other Turkic neighbours, the former where already used back in Tsarist times as messengers and ambassadors before and during the Russian invasion of Central Asia. A fact that is still remembered by some in Central Asia who resent the role played by the Tatars. The same took place during the Bolshevik revolution, with Tatars playing a role in the dissemination of the communist ideology in the region. Putin would be simply following an age-old tradition by delegating on Minnikhanov most of the interactions with his Turkmen counterpart.

In some instances the Tatar has played this role of messenger openly, like when he visited Asghabat in 2013 to take part in the Nowruz celebrations and “conveyed greetings to Gurbanguly Berdymukhamedov on behalf of Russian President Vladimir Putin.” However, in most cases it is not that obvious and what is highlighted are the continuous links between Turkmenistan and Tatarstan and the potential for increased cooperation.

Apart from Putin’s strategy, the personal component may still play a part. Since its independence, Turkmenistan has kept close links to Russia, with the usual ups and downs, and these seem to be strengthening in the last years. Meetings between Putin and Berdymukhamedov are no longer unusual and some of them have even gone viral as a result of the Turkmen’s antics. However, the Turkmen president might find it easier to deal with Minnikhanov instead than with his Russian counterpart, who is a much more imposing figure. An example of this was took place during last August’s Caspian Economic Forum celebrated in Avaza (Turkmenistan) in which a relaxed Berdymukhamedov, probably medicated but nonetheless at ease, was seen comfortably chatting with Minnikhanov about luxury cars.

Thus it is likely that the frequent encounters between the presidents of Turkmenistan and Tatarstan respond both to Putin’s delegation of authority on Minnikhanov as well as Berdymukhamedov’s own preference in dealing with the Tatar. Nevertheless, as it is usually the case when reporting on Turkmenistan, there is no transparency on the matter nor a convincing official explanation of the regular meetings.

Serdar Berdymukhamedov’s first visit to Kazan as minister will most likely not be his last. Besides the original aim of the meeting, that of expanding bilateral cooperation between both parties, the son continues to follow in his father’s footsteps, and that includes carrying on the more than special relationship between Turkmenistan and Tatarstan. Or Turkmenistan and Russia, depending on how one looks at it.

3 comments on “Turkmenistan and Tatarstan, more than just a special relationship”