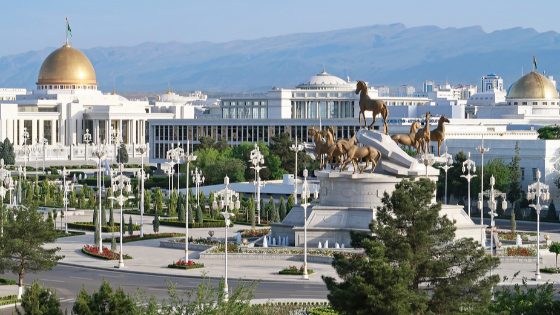 The latest developments in Turkmenistan as a result of the coronavirus have demonstrated once again that the capital, the marbled pride and joy of the regime, takes priority over the rest of the country.

Despite Turkmenistan’s isolation and secretive nature, Ashgabat is its window to the world. Since the country’s independence, billions of dollars have been spent in creating an artificial, albeit expensive, façade of white marble buildings, eccentric monuments and underused pharaonic infrastructures. While other such monuments also dot the landscape of other towns and cities, Ashgabat has been its main recipient, along with other privileges.

The few visitors that manage to access the country get an uneasy impression of a phantasmagorical city, devoid of citizens but with superficial luxuries. A false sense of prosperity that is not felt in Turkmenistan’s other urban centres, or even within the real Ashgabat that the occasional tourist never gets to see. The tall marble buildings, golden statues and decorative fountains is what the regime wants the foreigner to see. In other words, an irreal success story.

The regime’s favouritism with the capital is more evident during times of crisis. Despite being an energy-rich nation with large reserves of natural gas, Turkmenistan has been suffering a self-made economic crisis in the last years. Food supply has been a major issue and, in line with the regime’s policies, it has been prioritised to Ashgabat in detriment of the regions. When the shortage also hit the capital last year it became evident that the crisis was serious. Similarly, the authorities have shielded Ashgabat from internal migrants, not allowing citizens from other regions to access the capital in search of work and fining and expelling them when found during raids by the police. The current situation with the notorious COVID-19 has highlighted once again Ashgabat’s as an island of marble and gold in the middle of the desert.

Back in early February, the Turkmen authorities set up a quarantine camp in Turkmenabat, the country’s second largest city, some 600 kilometres north-east of the capital, near the Uzbek border. Passengers coming from China and other countries with a large number of coronavirus cases were kept interned in the camp. In addition, planes coming from China, before flights were cancelled, were diverted from Ashgabat to Turkmenabat. For lack of an official explanation, it seemed that the government wanted to keep the virus and the rumours around it outside the capital.

The common restrictions to access Ashgabat, forbidden in many cases with those with car registration plates from outside, have now been strengthened and the city is now effectively sealed off and not accessible for non-residents. Only those with the relevant permits are allowed to board planes and trains to the capital, and similar restrictions are in place for drivers. While the capital has been blockaded, travel has also been restricted in the rest of the country between the provinces. If the past is something to go by, it is expected for Ashgabat to receive the largest share of the nations meagre and depleted medical resources, which still won’t be enough.

It is not uncommon for capital cities to attract the lion’s share of a government’s budget and attention. They are considered in many aspects the heart of the nation and, with exceptions, they tend to be not only the political centre but also the economic powerhouse of the country. However, Turkmenistan’s case goes beyond that. President Niyazov first, and Berdymukhamedov now, use Ashgabat as a showcase of the country’s purported prosperity, including the most strident personality cult monuments. That is why, when a crisis, whether economic, social or medical, reaches the capital it is an indication that the situation is concerning. Ashgabat, the apple of the regime’s eye, is the last to feel the shockwaves of negative events happening across the country, in Turkmenabat, Dashoguz, Balkanabat and elsewhere. But neither it’s marble façade nor the authorities’ efforts can keep holding the fabricated picture of perfection for long.

0 comments on “Ashgabat, the apple of the regime’s eye”