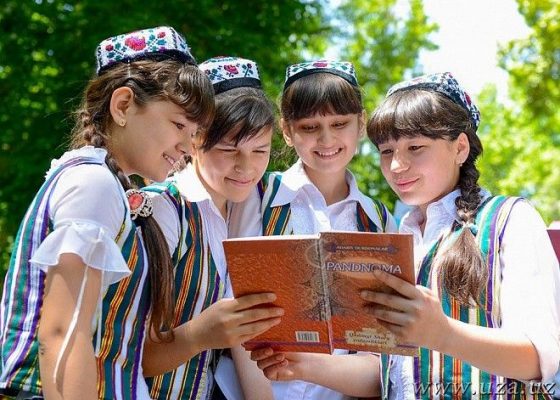 As Uzbekistan becomes more open, Uzbeks, especially university students, are embracing the United States and the rest of the Western world. The most effective and beneficial way young Uzbeks are welcoming and engaging with these new relationships is through the English language.

Studying English has tangible benefits, which Uzbeks are already using to make a profit. According to the Caspian Policy Center, tourism in Uzbekistan has “nearly increased five-fold over the last three years.” Included in this increase, are tourists from Europe and the United States, and as more Western tourists begin to visit the country, Uzbeks with knowledge of the English language are able to create an advantage for themselves in the tourism industry, especially as tour guides and owners of tour companies. Many Uzbek university students realize this, and that is why when English classes are offered, they quickly become filled. For example, at Tashkent State University of the Uzbek Language and Literature (TSUULL), there has been much demand for English language programing. TSUULL is the university most translators and interpreters study, and many of the students interviewed recognized the importance the English language has for their futures. As one student mentioned, “Without knowledge of the English language, no large corporation in Uzbekistan would take me seriously.” This insight from the younger, up-and-coming Uzbek generation demonstrates the growing importance of English in the business sector, especially in tourism.

An investment in democracy building and civil society creation

Uzbeks take education seriously, with many vying for master’s and doctorate degrees. For many students, both inside the capital and also in the regions, studying the English language is a step in this goal to attain advanced degrees in the United States and Europe. Before, learning outside Uzbekistan was reserved for elites, but now that many universities are offering English language courses, Uzbek students from all economic backgrounds desire to study abroad in English-speaking countries. One advantage of the desire to learn English for Western countries is that by learning English, Uzbek students will have the opportunity to study in Western countries, later returning to Uzbekistan and bringing with them Western ideas. This will further the development of their country and continue to achieve more “open” policies.

After the collapse of the Soviet Union and until the early 2000s, the Uzbek government funded Uzbek students’ bachelor and master’s education in foreign countries (like the United States) through a program called “Umid.” Upon completion of this program, graduates were required to return to Uzbekistan, and most would work for the government. This program allowed for Western trained students to have an impact on the policies and procedures of the Uzbek government. Unfortunately, this program ended when relations with the West began to dissolve in the early 2000s.

Today, Uzbekistan has a scholarship for master’s students through the Karimov Foundation. Upon completion, students are also required to return to Uzbekistan, but there is no requirement to work for the government. While some students have begun to work for the government, there is not enough data or personal testimonies to understand the impacts. However, any Western educated Uzbek would undoubtedly bring back some ideas to the country to help further its democracy-building endeavors.

Even as programs like Fulbright are adding more English teaching positions, there still remains a lack of qualified English-speaking instructors in the country. In university programs, it is rare to find a native English speaker, which lowers the quality of the English language being taught to students. In addition, many universities lack physical textbooks for students and instructors. By providing these materials, English language acquisition can be improved. If the United States and Europe want to increase their influence in the region, including Uzbekistan, the most effective way to do so is through English language courses and by providing the materials to teach the language.

Western democracies should continue to support English language development in Uzbekistan, not only because of the desire of young students, but also because it is an opportunity to advance Western ideas into a society influenced heavily by Russia and China. By offering more English courses, the ability to see real change and greater appreciation for the West and its ideals will be achieved.

Foreign languages have a natural “soft power” element to them, and former president Islam Karimov tried to mitigate this issue. Under his rule, Uzbekistan remained isolated from foreign powers trying to influence domestic policies and relations. English language learning centers were sparse in the capital and non-existent in the regions.

However, Russia was always in the background, as it considered the Central Asian states still within its sphere of influence. As a result, Russian schools and Russian-language centers were present throughout the country. In the early 2000s, as the United States began to play a more significant role in the region due to the war in Afghanistan, more Uzbeks began to learn English. Although, in 2005, the relationship between the U.S. and Uzbekistan reached a low point, due to the Uzbek state sanctioned violence in Andijan. During this period, there was a resurgence of bilateral relations between Moscow and Tashkent, and the Russian language grew in importance within the country.

However, when President Karimov died in 2016 and his reformed-minded replacement, Shavkat Mirziyoyev, came to power, the dynamics within the country changed again. President Mirziyoyev has sought to balance between the soft-power politics of Russia, the United States, and even recently, China. As all three of these nations vie for influence in the region, their influence on language, schools, and education policies within Uzbekistan will also continue to grow. With its Belt and Road Initiative, China has also tried to convince young Uzbeks of the importance of the Chinese language. While China does have a few language centers and a Confucius Institute in Tashkent, in the regions, the Chinese language has not taken hold. A majority of Uzbeks do not have a desire to learn any dialect of the Chinese language, and even in most universities it is not an option.

On the contrary, the United States and Great Britain have had much more luck advancing their interests through the English language. This is evident in the education policy of Uzbekistan. Starting from the lowest levels of school, young Uzbeks are now taught the English language and many universities in the capital teach in the English language or have significant English-language departments. Both nations also have learning centers throughout the country and offer free English discussions at their embassies.

While Russian will almost certainly be the lingua franca in the business sphere for years to come, the United States and European nations can significantly impact education and democratic reforms through their English-language “soft power.” As of now, the English language is seemingly winning in this struggle for power, especially as the younger generations view the English language as a way to advance their own goals and futures. Although, as demonstrated in the past, things are quick to change in Uzbekistan, so only time will be able to tell which language the Uzbek people will use in their daily lives, businesses, and future endeavors.

Ryan Schweitzer is a graduate of Columbia University and a current Fulbright research student in Uzbekistan. His research interests include security, identity formation, and nationalism in Central Asia

1 comment on “The growing importance of English in Uzbekistan”