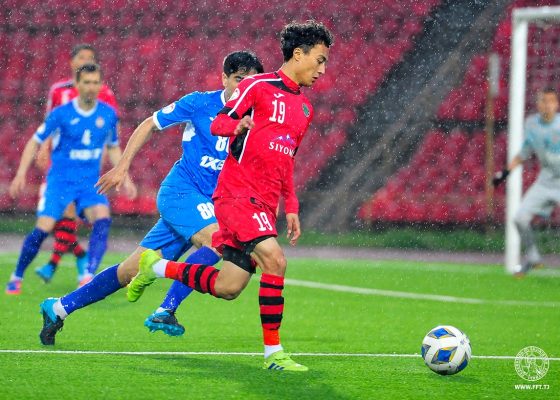 Sports, like many other aspects of everyday life, have come to a standstill in the world as a result of the coronavirus pandemic. Football junkies have no other option but to re-watch matches and highlights hoping for the prompt resumption of national and international competitions. However, they might be pleased to know that there are is still a handful of countries where football is going on as normal, and among them two are located in Central Asia: Tajikistan and Turkmenistan.

Large gatherings, such as those that take place during sportive events, tend to be some of the first causalities of the restrictions imposed by governments to curb the spread of the virus. One after another, football competitions have been cancelled throughout the world as countries face lockdown measures. But what if the governments don’t recognise COVID-19 as an issue or they go as far as denying its presence in their country?

Both Tajikistan and Turkmenistan haven’t officially reported any cases of coronavirus. Both countries have implemented different preventive measures, from closing mosques in Tajikistan to forbid interregional travel in Turkmenistan. However, football is still going on, giving the whole situation a dubious sense of normality.

Football as PR in Tajikistan

Tajikistan was the first of the Central Asian countries that announced that football would continue as planned. There wouldn’t be any public in the stands to prevent a potential spread of the virus, but otherwise the domestic competition would go forward.

The season opener took place on April 4 in a game for the Super Cup between the regime-backed Istiklol, current league and cup champions, and underdogs Khujand, league runners-up. As expected, it was the former who won the title 2-1. Since then, two match days have already been played in the 10-team league. Istiklol tops the table.

The Tajik Football Federation is making its best to attract those foreign football fans craving for some action and provides links in its twitter account to stream the games life. There are no excuses left now not to know the score of a, we hope thrilling, Istaravshan – Fayzkand. In addition, it is conveying messages to those countries worst hit by the virus, as it was seen during the game played this weekend between Istiklol and CSKA Pamir Dushanbe. “Stay strong, Spain! Tajikistan is praying for you!” could be read in the pitchside advertising boards. The gesture of Istiklol’s Alisher Dzhalilov after scoring a goal, going towards one of such banners, was widely circulated in the Spanish press, where summaries of the Tajik league now features in the country’s mainstream sports media.

Tajikistan seems to be capitalising on the lack of football across globe and its making an obscure competition of a country not known for its football (currently ranked by FIFA 121 out of 210 countries) the talk of the sporting community.

Turkmen football is back

The Turkmen authorities have recently decided not to leave Tajikistan alone in its endeavour to hold the banner of Central Asian football. According to Azatlyk, its domestic competition will resume on April 19 after the league had been originally postponed in late March after just 3 match days.

It should come as no surprise that the Turkmen regime has decided to backtrack and resume its football competition. In its efforts to portray a situation of normality, mass gatherings have continue to take place in the country, including 7,000 cyclists taking to the streets of the country to commemorate World Health Day on April 7.

Contrary to Tajikistan, fans will be allowed to the stadiums to witness Altyn Asyr, which has suspiciously won the last 6 seasons, lift the trophy once again. However, if the view is that of half-empty stands, coronavirus won’t be to blame as that is normally the aspect in a country where the government forces people to the stadiums when the national team is playing.

Once again, sports have become a tool in an authoritarian regime’s arsenal. In this case, Tajik and Turkmen authorities want to deny the existence of the pandemic in their countries, and resuming of the football leagues is just another way to transmit an abnormal sense of normality.

For those who Tajik and Turkmen football is not enough, they can also enjoy, for the time being, watching teams in Belarus, Nicaragua and Burundi play the beautiful game.

0 comments on “Football in times of coronavirus”