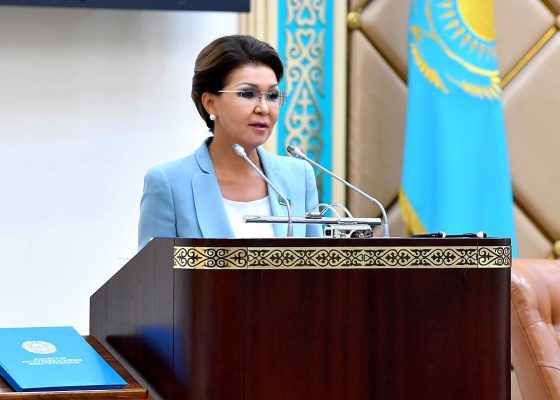 The removal on May 2 of Dariga Nazarbayeva, daughter of Nursultan Nazarbayev, by president Tokayev from her roles as senator and chair of the Senate came as a surprise. As many things that happen in the corridors of power in Nur-Sultan, the reasons behind this sudden change remain unknown. What made Tokayev take such a bold move? Did Nazarbayev instigate it? What will become now of Dariga?

Tokayev’s decision is important for two reasons. Firstly, Dariga is Nazarbayev’s eldest daughter, who despite not being president anymore is still considered to hold the reins of power. Secondly, Dariga held the post of chair of the Senate, which made her the successor to the president in the case he left office and therefore one of the most powerful political roles in the country. It is worth highlighting that it was precisely Tokayev’s job before becoming president and it was him who then appointed Dariga.

It is yet unclear why Tokayev, seen as a transitory figure and a face of a regime still controlled by Nazarbayev, made such a move. A number of theories have emerged that try to explain the reason behind Dariga’s dismissal.

A legal battle in the London is what could have prompted Dariga’s apparent fall from grace. As the British newspaper Independent reported, Dariga won a legal challenge in early April against attempts that forced her and her son to reveal the funds that were used to purchase three homes in London for £80m (around $100m). The properties were challenged by unexplained wealth orders (UWOs) as it was suspected that they had been “acquired as a means of laundering the process of unlawful conduct by Rakhat Aliyev [Dariga’s late and estranged husband].”

While Dariga won in the courts, her reputation, and more importantly that of her family, suffered another blow connecting her to unexplained wealth. It is not the first time the Nazarbayev clan has appeared in the press linked to such matters. Properties in Switzerland, Spain and the United Kingdom, drug-induced erratic behaviours, lavish parties… But the UWO scandal could have been the straw that broke the camel’s back and Nazarbayev could have decided that it was time distance Dariga from power. It wouldn’t be the first thing that such a move happens in Central Asia, as the late Islam Karimov did with her daughter Gulnara.

As Eurasianet’s Peter Leonard reports, what could be behind Tokayev’s move are Dariga’s own political ambitions. Nazarbayev’s daughter had been indirectly asking for more power for the legislative chamber, and ultimately for herself. Back in April 15, the Constitutional Council announced it was studying a petition from the Senate chair requesting further information on how to interpret an article in the constitution that refers to parliament’s authority on policymaking. That, coupled with comments made by Dariga on the need to change how the economy and government are run, are seen as her intention to increase her powers and have more of a say in Kazakhstan. Therefore, she must be stopped in her tacks.

If the need to curb Dariga’s aspirations was behind her dismissal, it must have had father’s approval as he is still pulling the strings in the background. If that is the case, it would make the next Nazarbayev family reunion even more awkward than usual.

Another theory behind Dariga’s being ousted would actually be beneficial for her. It could be, although the chances seem slim, that she will receive an important post within the government, perhaps that of Prime Minister in substitution of incumbent Askar Mamin. However, the boldness and swiftness with which her dismissal was announced would not support this possibility. That is not to say that in the coming weeks she will be appointed somewhere else, but with her powers severely curtailed.

D) All of the above?

It is possible that the reason behind Tokayev’s decision lies elsewhere or is a combination of the possibilities mentioned above. Perhaps it was not a single event that triggered Dariga’s dismissal but the sum of different parts that eventually led to the outcome. Scandals in the international press, her hunger for power and Nazarbayev’s own plans in this regard. What is almost certain is that Nursultan Nazarbayev must have been involved in it. Although formally not president anymore, Elbasy is still very much in charge of the country and a decision of such an importance, that affects him personally, would not have been carried out without, at least, his blessing.

Nazarbayev resigned a year ago to pilot the transition of power during his lifetime, avoiding Uzbekistan’s situation after Karimov’s demise. Rather than ensuring a dynastic succession, the main drivers behind his carefully crafted “retirement” have more to do with preserving his legacy as founder of the nation as well as his family’s wealth and position. However, it is doubtful that dismissing her eldest daughter from one of Kazakhstan’s top positions was part of his plan. Perhaps Nazarbayev has more in common with Karimov that he would like to admit, at least when it comes to have to deal with estranged daughters.