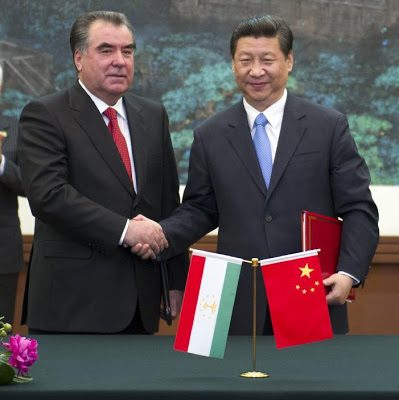 Tajikistan has become China’s entry point into Central Asia. Not economically, but politically and militarily. Dushanbe has been doing a series of concessions to China in the past decade and now an article published in Beijing’s official media outlets mentions Chinese territorial expansion at the expense of Tajikistan. And there is not much the Central Asian nation can do about it.

Earlier in July, an article titled “Tajikistan Initiated the Transfer to China of Its Land and the Lost Mountains of the Pamir Were Returned to Their True Master,” appeared in different official media outlets in China. The article’s writer, historian Cho Yau Lu, argued that during the last years of the Qin Dynasty (1644-1912) some historical territories were lost by China. After the fall of the dynasty, he wrote, China started to recover the land lost but some of it remained within the borders of other countries. “One of such very ancient regions is the Pamir, which was outside China 128 years due to the pressures of world powers [Great Britain and Russia]”. In other words, a sizeable part of Tajikistan belongs to China.

That a Chinese scholar, who admits only using Chinese sources, makes such a statement shouldn’t be noteworthy. However, it becomes news when the article is published in governmental media outlets. By doing so Beijing is at least testing the waters, if not tacitly supporting Lu’s hypothesis.

While it plays into the hands of Beijing’s foreign policy of late, stating that the Pamirs are a Chinese territory is widely inaccurate. Throughout the 18th and 19th centuries, what is now Xinjiang, or East Turkestan, with cities like Kashgar, Khotan and Yarkand, was a broadly an autonomous region where the Chinese authorities exercised nominal rule through representatives or ambans. The area was also disputed by the Khanate of Kokand and regularly fell in the hands of warlords, like the notorious Yakup Beg. Further to the west, in the Pamirs, China did not even have that nominal rule.

China can publish an article toying with the idea of territorial expansion at the expense of Tajikistan simply because it can. After years of a one-sided relationship there is little, if anything, that Dushanbe can do about it. After the publication of the article, Tajikistan’s Deputy Foreign Minister spoke with China’s ambassador and asked Beijing to prevent the publication of such controversial materials. A formal complaint is all the Tajik authorities can do.

The relationship between China and Tajikistan is not that of one where both parties are equals. Rather it is one between a world power and its small regional neighbour. Economically, politically and militarily, China has the upper hand.

Through years of lending, Tajikistan owes China $1.2 billion, almost half of the country’s foreign debt that stands at $2.9 billion. This figure is significant if we take into account that Tajikistan’s overall GDP is around $8.1 billion. This situation, referred by some as a debt trap, is not unique to Tajikistan, as it is also replicated in neighbouring Kyrgyzstan and other countries that have received investment as part of Beijing’s Belt and Road Initiative.

Politically, China has also scored a series of victories regarding land acquisitions in Tajikistan. In 2011, the Tajik parliament approved a border agreement signed between Dushanbe and Beijing in 1999 that saw some 1,122 square kilometres of Tajik territory being transferred to China. However, given the regime’s lack of transparency, the amount of land could be larger. In addition, that same year Tajikistan agreed to allow Chinese workers to farm some 2,000 hectares of land.

Then we come at the growing security ties between Beijing and Dushanbe. Besides military drills, which China also carries out with neighbouring countries like Uzbekistan, the Chinese have a base in Tajikistan near the Chinese and Afghan borders. In addition, China helped the Tajik authorities by building three military commissariats, three new military units, four headquarters, and a training base for Tajik forces in the Pamirs. The region the article claims should belong to China.

In first instance, rather than being the aim of territorial expansion, Tajikistan is useful given its border with Afghanistan and the Chinese region of Xinjiang, a region subject to instability in the last decades and where Beijing is carrying out its genocide against Uyghurs and other minorities. Protecting itself from any trouble that could spill from Afghanistan can be seen as the objective of Beijing’s military presence in the region. An added benefit can be the further leverage, if we reach the unlikely scenario where it’s needed, that it can exercise in Tajikistan. Therefore, Tajikistan, willingly or not, has become another tool in China’s foreign policy, in this case in China’s western border.

The future seems bleak for Tajikistan when it comes to China’s growing role. The Tajik regime, plagued with corruption and prioritising self-preservation, will continue to make concessions to China even at the expense of Tajik sovereignty. This by no means will result in China annexing the Gorno-Badakhshan Autonomous Province where the Tajik Pamirs are situated, as Cho Yau Lu would have wanted. But little by little further compromises will be made. These can take multiple forms, from murky deals to reduce Tajikistan’s debt to China, to stronger military links or further mining rights for Chinese companies, to name a few examples. A country in an already precarious economic situation before the pandemic, with a kleptocratic elite, Tajikistan will have to comply.

In the meantime, one can expect Moscow to be be keeping an eye on these developments, remaining vigilant and ensuring China doesn’t step on its role as Tajikistan’s main security partner.

0 comments on “China and Tajikistan, an uneven relationship”