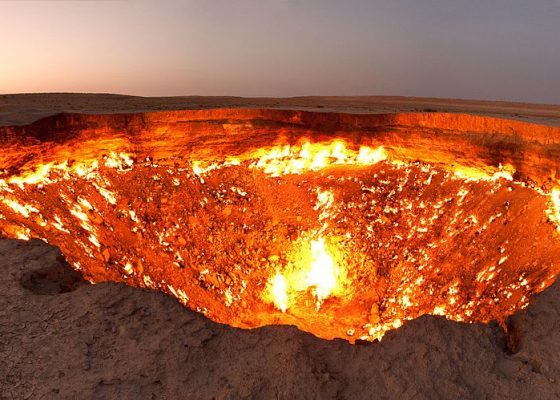 Turkmenistan is best known today for its eccentric dictator and a deep economic crisis that has resulted in shortages of basics foodstuffs, large unemployment and an exodus for those that can leave the country. However, things could have been very different for Turkmenistan.

Turkmenistan emerged as an independent nation in 1991 from the ashes of the Soviet Union. The first years after independence were hard in the former territories of the USSR, but Turkmenistan fared relatively well during those times of economic adjustment, doing better than not only its Central Asian neighbours but also than Russia. For instance, back in 1992 a litre of petrol cost 45 roubles in Moscow but 5 in Ashgabat, while the price of a loaf of bread in the Russian capital was of 5 roubles but only 50 kopecks in its Turkmen counterpart. What had been close to a Soviet backwater was in a better shape than Russia itself.

Despite the uncertainty, Turkmenistan started to open to the world. It seems hard to believe, even more now given the country’s isolation, but back then one could make international calls free of charge from public telephone booths in Ashgabat. The optimism of the early 1990s combined with the ingredients the country had been blessed with gave the impression that Turkmenistan could become a prosperous nation.

Turkmenistan had the natural resources, size and demographic landscape it needed to succeed, a combination that none of its Central Asian neighbours could enjoy. With copious reserves of natural gas (currently estimated to be the 6th country in the world in that regard), an extension similar to that of Spain and a population below the 4 million mark, Turkmenistan could consider itself lucky. This led the country’s first president, Saparmurat Niyazov, to boast that Turkmenistan would become a second Kuwait where everybody would be driving a Mercedes. And that could have been the case.

The boastful Niyazov, also known as Turkmenbashi, established a regime that ruined the prospects of the country becoming a second Kuwait. While Niyazov is mainly known for the personality cult he enforced and his authoritarian regime, it was not only lack of democracy that prevented Turkmenistan to fulfil its potential. After all, the energy-rich Gulf states are not democracies and have become prosperous nations for their citizens.

Poor economic management, an autarchic approach with limited foreign investment, lack of legal certainty for businesses, little space for free enterprises and widespread corruption that started from the very top, took its toll and turned the Kuwait comparison into an unreachable goal.

From Kuwait to Venezuela

Even though Turkmenistan became an example of what not to do when it came to an energy-rich country, during the Niyazov years (1991-2006) ordinary Turkmens still did better than most of their Central Asian neighbours. Gas prices remained high, bringing revenue to the state’s, or perhaps more accurately Niyazov’s, coffers. A social contract was put in place through which the government subsidized parts of the economy and provided a stable, albeit not prosperous, economic situation. In return, the citizens overlooked the fact that they were living in a repressive dictatorship.

During the first years of Niyazov’s successor, Gurbanguly Berdymukhamedov, the situation remained stable. Then gas prices fell, the authorities’ lack of vision and clumsiness reduced the number of its export markets to only one (China) and the economy started to show serious cracks. The social contract was then broken and citizens were made to pay for gas, water and electricity. While the president squandered billions of dollars in underused infrastructure projects and other vanity projects, ordinary Turkmens started feeling the effects of scarcity. Behind the marble façade, many Turkmens are forced to line for hours to withdraw money from ATMs, to buy food and many have had to sell their possessions to be able to eat. Turkmens have become used to dealing with inflation and the black market, not least because of an artificially inflated currency fixed at an exchange rate by the government. Add to this a crumbling health system, even before the pandemic hit, rampant corruption in every sphere of life and widespread unemployment. Instead of Kuwait, Turkmenistan is better compared with Venezuela.

Turkmenistan could be considered to have fallen under the “resource curse.” Having natural resources, a suitable demographic mix and a beneficial geographical location does not ensure success. From Venezuela in Latin America to Equatorial Guinea in Africa, corrupt and incompetent rulers and elites have squandered the prospects of countries that seemed poised for prosperity and success. However, none of them have to endure the lack of freedoms and repression the Turkmens suffer.

It is tragic to think what Turkmenistan could have become, and what it turned out to be. It had the potential to be a prosperous country for the region’s standard. Benefiting from the steady income from its gas sales, a privileged location as a transit point and a relatively small population, with the right management and investments, the present of the desert nation could have become very different. Instead, it is a repressive dictatorship where most of its citizens are struggling to make ends meet. It is a shame that despite its natural wealth Turkmenistan is in such a state but most importantly that irreparable damage has been done to its future.

As the renowned Turkmen poet Magtymguly Pyragy wrote in the 18th century: “A severe disaster has come and hit the people, […] I have been waiting long, but the good times have not come.” Even though it is hard to imagine that the situation can significantly change for the better in the decades to come, let’s hope the good times do end up coming for the Turkmen people. And for that to happen a great many things need to change.

0 comments on “Turkmenistan, the Kuwait that never was”