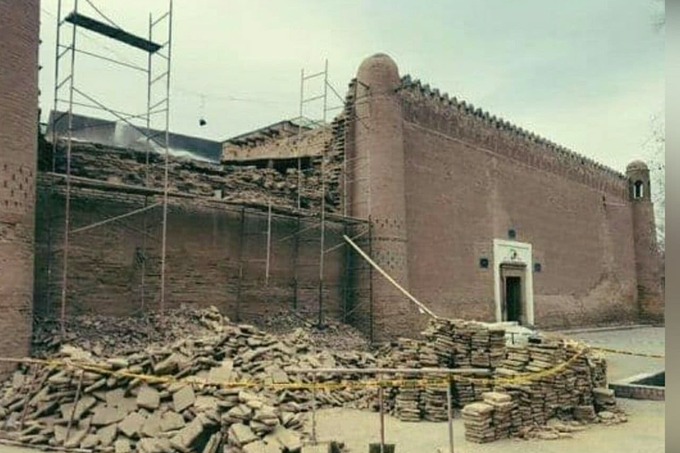 News of damage caused to historical structures in Uzbekistan continue to emerge. Despite the central authority’s effort to protect its heritage, destruction and demolition of historical buildings continues to take place in the country. The latest victims are Khiva’s Tash-Khovli palace and the possible site of Alexandria-on-the-Oxus.

On December 10, the Ministry of Culture of Uzbekistan reported on the damage being made to the Tash-Khovli palace after news of it emerged on social media. As the authorities acknowledge, a part of the eastern wall of the 19th century complex was illegally demolished on December 8 by a private contractor on the order of the Ichan-Kala Museum-Reserve (see image above, from the Восток и вокруг Telegram channel). According to the authorities, any renovation work on the Ichan-Kala, to which the palace belongs, should be carried out “on the basis of the conclusions of the Scientific-Expert Council under the Department [of Cultural Heritage]” and in agreement with UNESCO, given it is a World Heritage Site.

As it currently stands, the authorities have suspended all renovations in the palace and law enforcement agencies are looking into the infraction.

The Tash-Khovli palace was built between 1832 and 1838 by the then Khan of Khiva Allah Kuli Khan (r. 1826-42), and is one of the city’s main attractions. Composed of three courtyards, a labyrinth of corridors and the harem, the building was restored in 1997 on the occasion of Khiva’s 2,500th anniversary.

A day after the Ministry of Culture pronounced itself regarding the damage to the Tash-Khovli, Nur.uz reported on a similar incident, this time on the settlement of Kampyr Tepe. Quoting archaeologist Edward Rtveladze, a recently restored wall has been destroyed. Measuring 50 metres long and 3 metres high and including ancient towers, the structure was renovated over the course of ten years by Rtveladze and his colleagues. The works were funded by the Japan International Cooperation Agency (JICA) and counted with financial support from the US Embassy in Uzbekistan.

“Someone did it on purpose, maybe more than one person. I am not an investigator, it is not my business to look for the guilty. But I guess they want me to get the money for a new restoration again. I am amazed at the barbaric attitude of our people to their cultural heritage.,” said Rtveladze. The archaeologist added that last year the street in the fortress had also been destroyed, and afterwards restored, but had not been made public.

In the first instance, the Ministry of Culture said that the heavy rains in November were to blame for the collapse. However, according to Rtveladze the wall was in a good state back then and the destruction was deliberate, and not due to the weather or earthquakes. As a result, the Department of Cultural Heritage has appealed to the General Prosecutor’s Office to verify the incident.

Kampyr Tepe, in Uzbekistan’s southern Surkhandarya region, is believed to be the site of Alexandria Oxiana, although such title is also claimed by Afghanistan’s Ai-Khanum. The town, composed of Hellenistic style fortifications, a residential area, trade suburbs and a port, is thought to have been founded by Alexander the Great during his Central Asian campaigns and reached its peak during the period of the Kushan kingdom . Discovered by Rtveladze himself in 1972, Macedonian, Graeco-Bactrian, and Kushan remains have been unearthed in the site since then.

Tash-Khovli and Kampyr Tepe are not the only structures to have been affected this year. As RFE/RL’s Bruce Pannier reported last month, a 5th-6th century archaeological site in the country’s Kashkadarya region is being destroyed to obtain materials for bricks. This issue does not only affect centuries old structures, but also Tsarist-era buildings in the capital Tashkent.

The Uzbek authorities, at a central level, seem to be working to prevent such things from happening. It looks like gone are the days from presidential-sponsored calamities like the bulldozing of Shahrisabz’s historical centre done on the orders of the previous president, Islam Karimov.

Most of the damages caused to the country’s historical heritage take place under the auspices of the local authorities. A “do now, ask later” approach can be carried out due to the lack of supervision and accountability. Until those responsible, whether state employees or private companies, are not held accountable, the issue will remain. Law has to be enforced, and fines and other penalties issued to whoever is liable. Only then will those, knowingly or not, damaging Uzbekistan’s heritage think twice about committing such actions. Despite positive steps, ultimately the responsibility lies within the Uzbek government. More has to be done.

At a time when Uzbekistan is opening to the world and wants to boost its tourism industry, the authorities should know how key it is to preserve its History. This also includes avoiding botched restorations. In the long-term, the country’s tourism sector, and therefore its economy and prestige, will benefit from the protection of the country’s historical jewels.

If the financial incentive is not enough, the authorities also have a moral responsibility to preserve its historical heritage for the new generations. They should also be able to marvel at Uzbekistan’s rich and unique legacy, whether that is a Hellenistic settlement, a Sogdian mound, a richly decorated palace or Tsarist-era living quarters. Progress cannot be achieved without taking care of the past. And the sooner that is understood, the better for all.