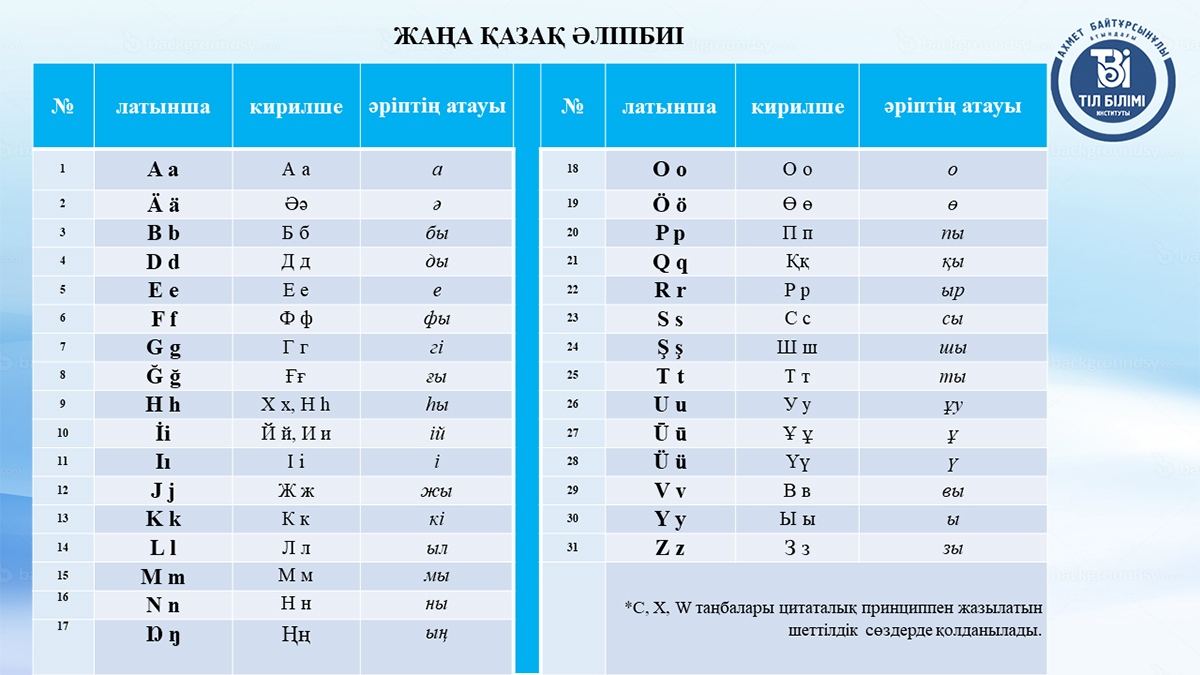 A new Kazakh alphabet using Latin characters will be the fourth attempt at transitioning away from the Cyrillic script. It is a subject in which the authorities have insisted in the last decades but have not succeeded at. Will this be the definite version?

On January 28, the commission in charge of translating the Kazakh alphabet into Latin script presented its findings to the Primer Minister Askar Mamin. A new alphabet made up of 31 letters, incorporating diacritic symbols, was proposed by the experts (see image below). This is the fifth writing system using Latin characters Kazakhs have seen in little under a century, and the fourth since the country’s independence.

“The improved version of the alphabet will give a new impetus to the development of the Kazakh language and will contribute to its modernization in accordance with modern trends. In the coming period, it is necessary to carry out a large preparatory work on the gradual transition to the Latin script of the Kazakh language,” declared the Prime Minister. However, this is not the first time a Kazakh political figure makes such a statement.

Kazakh currently uses a Cyrillic script, one of the Soviet Union’s more enduring legacy in the country. Prior to the existence of the USSR, Arabic had been for centuries the script of choice. In a move that also took place in the other Central Asian republics, Arabic was substituted by Latin in 1929 before finally switching to Cyrillic in 1940.

Following independence, the Central Asian republics started questioning the Cyrillic script. The first point to have in consideration was its suitability to the Turkic native languages. Second, and perhaps more important, was asserting a new national identity. Turkmenistan became the first, and only, country to completely switch from Cyrillic to Latin. Uzbekistan is working on the matter and currently both scripts coexist. In Kazakhstan, a country with a large Russian-speaking population, it was not until 2006 that the idea came into existence.

As The Diplomat’s Catherine Putz points out, back in 2006 Nursultan Nazarbayev first mentioned the need to transition away from Cyrillic. However, it was not until 2017 that a Latin alphabet, with a high number of apostrophes, was presented. This version was criticised by experts and as a result was withdrawn, with another one being presented in 2018. This writing system failed too and yet another alphabet came to light in 2019. Therefore, the one recently proposed makes it the fourth attempt at coming up with a definitive answer.

Similarly, the government plans have changed accordingly. From a 2025 deadline to fully adopt the Latin script set up in 2012, to 2035 in 2019 and now 2031 announced as the date envisioned for the transition.

Will the fifth version of the Latin alphabet be the definite one? Based on previous experience it is hard to know. Linguistics aside, the same issues that affected the implementation of its predecessors remain.

The constant changes hinder the credibility of the new alphabet. Why would society make an effort of learning a new set of characters if they are probably going to change? In addition, old habits die hard. Making a population as diverse as Kazakhstan’s to learn a new alphabet for a language that in many cases is not the native tongue is a challenge. It is worth highlighting that Kazakhstan continues to have a sizeable Russian and Ukrainian population, with both groups accounting for 23% of the country’s 19 million people, and Russian remains the lingua franca. While newer generations could be faster to adopt it, given it shares similarities in script with other languages such as English, older people are understandably more reticent.

Writing about the failed 2018 apostrophised version of the alphabet, Diana Kudaibergenova explained that it “inevitably directs attention to the legacies of the Soviet Union, unsolved problems of socio-linguistic and cultural-linguistic identification, and failed policies to promote Kazakh in an original or exciting way rather than forcing it on a complex milieu of Russian-speakers.” Three years and two alphabets later, the same issues persist.

Then there is the economic impact of changing scripts. A 2007 study put it under $1 billion, while in 2018 the government estimated a cost of $664 million to the state coffers over a seven-year transition period. But the impact on companies and individuals is another matter.

Finally, the question remains about the actual political will behind the script transition. Bold statements and announcements are one thing, but a dedicated and realistic implementation plan is something quite different. For the change to take place, the authorities must be committed to it. So far, the initiatives have been much publicised but have not been able to overcome the obstacles named above. Characters may have changed, apostrophes added or removed, but no major policy change has accompanied them.

Is pushing for a new alphabet a real priority? With the economic impact of the pandemic, the country’s unfinished power transition and the political unrest of certain segments in society, it is hard to image for the never-ending discussion of the alphabet change to be at the top of the government’s agenda. And until it does, it will probably linger on for many years to come.