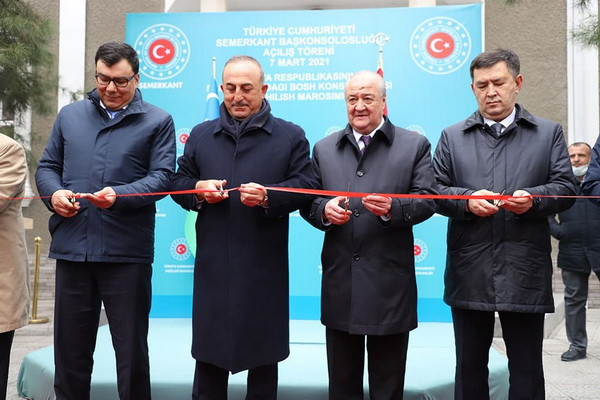 The Turkish Foreign Minister’s trip to Central Asia brought him to Turkmenistan, Kyrgyzstan and Uzbekistan, but it was in the latter where he spent most of his time and where the more significant agreements were reached.

From the March 5 and 10, Turkey’s Mevlut Cavusoglu embarked on a tour that took him to three of Central Asia’s countries. The aim of the trip was said to be to discuss bilateral relations as well as regional developments, a common objective in such events. However, the way the official visits unfolded exposed that among the three nations, Uzbekistan was the main reason for the Turkish minister’s tour.

Returning the visit in Turkmenistan

Cavusoglu started his trip in Turkmenistan, arriving on the evening of March 5. The following day he first met in Ashgabat with his Turkmen counterpart, Rashit Meredov. This seemed like a déjà vu of what took place two weeks earlier, during Meredov’s visit to Turkey.

After that, Cavusoglu was received by the country’s president, Gurbanguly Berdymukhamedov. According to Turkmenistan’s state news agency, both sides held talks about trade, energy, transport and communications. Special emphasis was given to the Turkey-Turkmenistan-Azerbaijan trilateral summit and, from the Turkmen side, to the participation of Turkish companies in Turkmenistan’s infrastructure projects.

It is hard to understand why, two weeks after the Turkmen Foreign Minister met with Cavusoglu and the Turkish president in Ankara, the visit would be returned so soon as no progress would have been made by then. The most reasonable explanation would be that going to Central Asia and not visiting Turkmenistan would not have been well received in Ashgabat. This is especially relevant when there are talks about bringing Turkmen gas to Europe through Turkey and the market that Turkmenistan represents for Turkish companies, notably in the construction industry.

A Silk Road tour in Uzbekistan

After Ashgabat, Cavusoglu entered Uzbekistan, where he stayed from March 6 to 9. Instead of limiting himself to the capital, as he had done in Turkmenistan and would later do in Kyrgyzstan, the Turkish minister stopped at the cities of Khiva, Bukhara and Samarkand. In these famed Silk Route sites, he visited the usual tourist attractions although the purpose of his stay in Samarkand was not simply to admire the Registan.

While in Timur’s capital, Cavusoglu inaugurated the Turkish consulate. A clear indication of Turkey’s aim to expand its influence in Uzbekistan. It is worth noting that the one in Samarkand is Turkey’s second consulate in the region, after Almaty’s (Kazakhstan), and it will be the second one in the city as a whole, as up until now only Kazakhstan had a diplomatic legation in Samarkand.

Once in Uzbekistan’s capital, Tashkent, Cavusoglu held a number of meetings with Uzbekistan’s Foreign Minister Abdulaziz Kamilov, who had accompanied him since Khiva, Deputy Prime Minister and Minister for Investments and Foreign Trade Sardor Umurzakov, and the President Shavkat Mirzoyoyev.

Signing a preferential trade agreement and starting negotiations for a comprehensive free trade agreement (FTA) were some of the main objectives of the visit. Uzbekistan is increasingly becoming an important market for Turkey. Last year, Turkey opened the largest number of foreign companies in the Central Asian nation, representing 18% of all that were established in 2020. The number of companies with Turkish capital in Uzbekistan now stands at 1,611. In addition, bilateral trade between both nations almost doubled in the period 2016-2019, from $1.24 billion to $2.37 billion. In this line, both sides discussed the celebration of the Intergovernmental Commission on Trade and Economic Cooperation and a business forum for representatives of the business communities that will take place in May in Tashkent.

Later in the year, Turkey’s president is expected to pay a visit to his Uzbek counterpart as part of the second summit of the Turkish-Uzbek Strategic Cooperation Council, therefore returning Mirziyoyev’s official trip to Turkey last year.

After Tashkent, Cavusoglu flew to Bishkek, where he stayed from March 9 to 10. In the Kyrgyz capital he met with the recently-elected Sadyr Japarov, Prime Minister Ulukbek Mairpov and Foreign Minister Ruslan Kazakbayev. Once again the focus was on trade, with the Turkish side aiming to start negotiations for preferential trade agreement with an FTA as ultimate goal.

The trip also had a cultural component, with a visit to Chingiz Aimatov’s museum and the opening of a laboratory and health centre at the Kyrgyzstan-Turkey Manas University, as well as an event of the Antalya Diplomacy Forum in the same higher education institution. In a conference with Kazakbayev, Cavusoglu also announced the upcoming opening of a school by the Maarif Foundation, the first in Central Asia, filling the void left by the closure of the Gulen-linked schools.

Since the independence of the Central Asian nations, the region has been a focus of Turkish foreign policy. The high hopes of the 90s, when Central Asia was seen as an opportunity to expand Turkish influence and as brand new markets, did not materialise. While the country has been present in the region since then, especially through businesses and a degree of soft power, it has lagged significantly behind Russia, China and other players.

Uzbekistan’s opening under Mirziyoyev represents an opportunity for Turkey to increase ties with Central Asia’s most populous country, as well as for Uzbekistan to diversify its foreign policy. The recent tour by the Turkish Foreign Minister, with his extended stay in Uzbekistan, is another hint of the growing importance of Uzbekistan in Turkey’s Central Asian agenda.