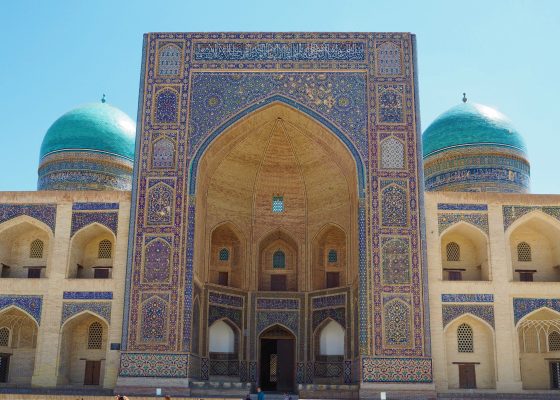 Timur, or Tamerlane as he is also known, has monopolised a large part of Central Asian history, overshadowing other fascinating characters and periods that shaped the region. His historical significance, coupled with the fascination it inspired in the West and modern Uzbekistan’s efforts to portray him as the founder of the nation, has meant that Timur has eclipsed a dynasty that became the great Central Asian power of the 16th century and that left its indelible mark in the region. That dynasty are the Shaybanids.

The traveller that today wonders in the streets of Bukhara, admiring its mosques, madrasahs and khankahs will, perhaps unknowingly, be witnessing the splendour that remains of the Shaybanid Khanate of Bukhara, which in its peak stretched from Herat in the south to Kazakh Turkestan in the north, from the shores of the Persian Caspian in the west to the westernmost borders of China in the east. Who were the Shaybanids and how did they manage to rule Central Asia for a century?

Like the majority of the states that took shape in Central Asia and beyond after the Mongol invasion, the Shaybanids are descendants from a Mongol prince, in their case of Shayban, from whom they took their name, a grandson of Genghis Khan himself through his eldest son Jochi. They were but one of the many tribes that composed the Mongol Empire and, after its collapse, the Golden Horde. Later own, their confederation would refer themselves as Uzbeks, which may come from the name of a ruler the Golden Horde under which they served, Öz Beg Khan (r. 1313-1341).

The Shaybanids first rose to prominence during the leadership of Abul Khayr Khan (r. 1428-1468), who united a number tribes and established an impressive state in modern Kazakhstan. His legacy, however, was short-lived as before his death his empire starting falling apart. The defeat against another Mongol tribe, the Oirats, dealt a serious blow that was made worse by the desertion of two of his vassal chiefs, Kerey and Janibek, who would go on to establish the Kazakh Khanate. It would be his grandson, Muhammad Shaybani who would not only equal but surpass his grandfather and establish the Shaybanids in what became their homeland for a century.

The rise of the Shaybanids

Muhammad Shaybani (1451-1510) started his raise to power as a soldier of fortune, and gradually increased his influence and reputation to become a well-known warlord. As many nomadic conquerors before him, Shaybani entered in the service of a settled ruler. Throughout History, nomadic mercenaries from the steppe were employed as soldiers by their sedentary patrons and, in many cases, the employees eventually ousted their patrons and founded their own empires. In Shaybani’s case, he was employed by the Timurid ruler of Samarkand. Sultan Ahmed Mirza, Shaybani’s patron, was one of a number of Timurid princes who ruled in the remnants of Timur’s empire. This situation was to prove an advantage for the Shaybanids, who did not had to face a strong and coordinated enemy in what is modern day Uzbekistan and Afghanistan.

Shaybani was not in Sultan Ahmed Mirza’s service for long, as he betrayed him in the battle of the Chirchiq River (1488) and eventually conquered Samarkand himself as well the other Timurid territories in Central Asia, making him the most powerful figure in the region and establishing the foundations of his Khanate. The capture of Herat eventually brought him into conflict with the Safavids, a new dynasty that had been recently established in Persia by Shah Ismail. Both rulers met in the battlefield in 1510 near Merv (Turkmenistan). The Uzbeks, who outnumbered their enemies, fell into a trap of feigned retreat, a classic tactic of the nomadic warriors, and where severely defeated. Muhammad Shaybani was among the victims and, in a scene typical of Game of Thrones, Shah Ismail turned Shaybani’s skull into a drinking cup.

As one would expect, Shaybani’s death was a disaster for the Uzbeks and the authority of his successors was weakened. The Safavids undid many of Shaybani’s conquests and allied themselves with Babur, the Timurid prince and founder of the Moghul Empire who was still struggling to retake his ancestral territories. The Uzbeks in turn strengthened their links with the Ottomans, the Persians’ archenemy in the west. But it was the Safavids who had the upper hand. Assisted by Babur, they crossed the Oxus and invaded the heartland of the Shaybanid Khanate. The Persian advance, as well as Babur’s aspirations, were put to a halt in 1512 at the battle of Ghazdewan, in modern day Uzbekistan, where the Uzbeks defeated the invaders despite being greatly outnumbered. Babur managed to flee but the Safavid general was captured and beheaded. The man who ordered the execution was no other than Ubaidullah, who had led the Uzbek centre and would become one the greatest Shaybanid rulers.

A nephew of Muhammad Shaybani, Ubaidullah rose to power during the reign of Kuchum (r. 1512-1531), who was the nominal khan but delegated military matters to him. Ubaidullah resumed the hostilities with the Safavids and, through numerous campaigns, Herat and other towns changed hands multiple times. After an interlude during Abu Said’s reign (1531-1534), who was not keen on Ubaidullah’s wars in Persia, he became khan himself (1534-1539).

As a result of Ubaidullah’s campaigns in Persia, the Shaybanids accumulated booty and riches, some of which was spent to build the magnificent Mir-i-Arab madrasah, where the ruler was later buried. Apart from being a military commander, he was also a man of letters who, under the penname of ‘Ubaidi’, wrote poetry in Persian, Arabic and Turkic. A passion also inherited by his son Abdul Aziz, who also composed verses and amassed an impressive library during his autonomous reign in Bukhara (1540-1551). Ubaidullah established Bukhara as his capital and would from that time become the political and cultural centre of what became known as the Khanate of Bukhara.

The golden age of the Shaybanids

After the death of Ubaidullah, the khanate was gripped by instability with four different khans in 22 years that were unable to establish their authority. The khanate was divided into fiefdoms belonging to different Shaybanid leaders who fought with each other to increase their dominions. From this chaos emerged who was to became the greatest ruler of the dynasty, Abdullah Khan II.

First under the nominal rule of his father, the pious Iskander (1561-1583), and afterwards as khan himself (1583-1598), Abdullah Khan fought with his relatives and reunited the Shaybanid dominions. He then led numerous campaigns against the Persians, Khwarezmians and Kazakhs, extending the khanate’s borders and capturing important cities like Herat, Mashhad and Astarabad, in Persia, Khiva and Urgench, in Khwarezm, and Sayram, in Turkestan. This he did while maintaining friendly terms with the Mughals.

Apart from being an accomplished warrior, Abdullah Khan was also a distinguished poet, as his predecessors had been before him. Benefitting from internal stability, Bukhara flourished as the capital, attracting artists, intellectuals and merchants from the region and beyond. Beautiful buildings like the Kosh and Hoja Gaukushan ensembles in Bukhara and the Kukeldash madrasahs in Bukhara and Tashkent, to name a few, were erected during that period and joined the ranks of other Shaybanid monuments built previously like the large Kalyan mosque or the Mir-i-Arab madrasah in Bukhara. These monuments were perhaps not as grandiose as those built by Timur but not for that less impressive.

Abdullah Khan II was a great ruler but not that good of a father. His love for his only son would eventually lead to the end of the dynasty. Abdul Mumin, a spoiled and impulsive prince, disobeyed his father multiple times, for which he was forgiven by Abdullah Khan despite the warnings, until he eventually revolted against him shortly before the khan’s death. When he passed away, Abdul Mumin became the new khan and purged his father’s supporters. This included the execution of the able and loyal Qulbaba, who had held and defended Herat for years and had warned Abdullah Khan about his son. In addition, it is in honour of Qulbaba that the Kukeldash madrasahs were built (Kukeldash means ‘foster brother’ in reference to the relationship between Abdullah Khan and Qulbaba). In revenge, Abdul Mumin captured Qulbaba and put him in a specially designed cage with spikes inside, which he placed on top of a camel so that the general would be injured with every step the animal took. After this torture, the new khan executed him himself shooting him with an arrow. Abdul Mumin’s actions enraged the nobles, who rebelled and killed him after just a few months in power.

As droplets of water disappear in the sands of the Kyzylkum, so did the Shaybanid dynasty and the regional hegemony of the Bukhara Khanate after the death of Abdul Mumin. What followed was a long journey through the desert of historical anonymity until the invasion of the region by Nadir Shah in the 18th century and, more importantly, the Great Game between Britain and Russia in the 19th century. But by then the Khanate, and later Emirate, of Bukhara, which in its heyday had been a political and cultural power that rivalled the Safavids and Mughals, had been reduced to a forgotten backwater.