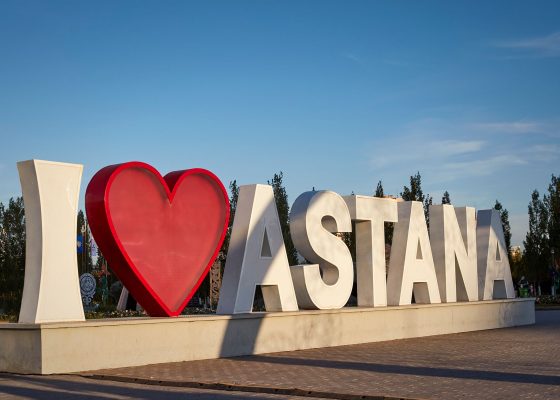 For centuries, London has been London, Paris has been Paris and Rome has been Rome. Despite revolutions, wars and upheavals, the names of those cities have remained the same after evolving naturally from their original terms. Abruptly changing the name of cities can seem alien to the Western audience, especially in Europe, but looking further east, it is a phenomenon that has regularly taken place in the 20th century, namely in the Soviet Union, and is still happening in the Central Asian republics. Ideologies, political motivations and megalomania have all played a part in the renaming of cities and towns throughout Central Asia.

Names are powerful. From individuals to nations or supranational entities, they are not only aesthetic but they also carry with them a meaning and connotation. Cities are no exception. They are yet another instrument in a regime’s toolbox to force their narrative upon its people and portray a desired image. From Tsarist times to the present, Central Asia’s urban populations have witnessed how their hometowns have changed names, sometimes even multiple times. One can follow the history of the region by studying how the nomenclature has changed throughout the last century. From Communist personalities to the rulers’ relatives, from ancient terms to poets, they all have been used by the relevant authorities and paint an accurate picture of the region’s changing circumstances.

The establishment of the USSR brought changes in the names of cities to praise its heroes. Decades later, the republics moved away from their Soviet heritage and looked towards nationalism and their own national languages and history. In many cases, depending on the countries, the authoritarian regimes also reverted to megalomania and that was also reflected in their urban centres. All of these changes had their own motivations and historical contexts. What were they?

The Russian conquest of Central Asia in the 19th century resulted the foundation of new settlements by the Tsarist forces, mainly in modern-day Kazakhstan, where nomadic tradition was stronger. A number of forts that eventually evolved into towns were established by the Russians, including those of Verniy and Alexandrovsky, the latter in honour of the Tsar Alexander I. In many cases, these were erected near existing settlements that were little more than villages and therefore should be considered as being built from scratch. Similarly, Fort Perovsky, named after the general that conquered it, was constructed over the fortress of Ak-Mechet after it was lost by the Khanate of Kokand to the Russians. Driven by military expansion, the Tsarist forces did not alter significantly the naming conventions and in most cases were limited themselves to naming their newly-founded settlements.

The Russian Revolution and the establishment of the Soviet Union meant a clean break from the Tsarist regime. Old names, practises and heroes became a thing of the past and were substituted by Bolshevik principles and personalities. As a result, the Tsarist capital changed from St Petersburg/Petrograd to Leningrad, Tsaritsyn to Stalingrad, Yekaterinburg to Sverdlovsk and so on. Dead were references to Russia’s past, the country had new heroes that had to be honoured. Central Asia, although a distant region from the USSRs centre, was no exception to the trend.

The Tsarist forts, by this time towns, were renamed by the Bolsheviks. Verniy became Alma-Ata (1921), a name with Kazakh roots, Fort Alexandrovsky abandoned its royal name for that of Shevchenko (1939) in honour of the Ukrainian poet Taras Shevchenko who had spent time there in exile in the 19th century, and Fort Perovsky was given the Kazakh and communist-sounding name of Kyzyl-Orda (1925), or Red City. However, the changes were more evident in the capitals of the Kyrgyz and Tajik SSRs.

Bishkek and Dushanbe became Frunze (1926) and Stalinabad (1929), respectively. The former was in honour of Mikhail Frunze, a Bolshevik revolutionary and Red Army commander that succeeded Trotsky as Commissar for Military and Naval Affairs. The Kyrgyz capital wouldn’t revert to its pre-revolutionary name, with a grammatical alteration, until 1991, just before its independence. In the Tajik case, just as Stalin had his city in the Volga, using the Russian –grad suffix for city, he also ended up with a Central Asian equivalent using the Persian suffix –abad, in a curious case of indigenisation. The same applied later on to Lenin, when Leninabad (1936) substituted the ancient Silk Road town of Khujand, also in Tajikistan. As was the case in the whole of the Soviet Union, de-Stalinisation also reached Central Asia and Stalinabad returned to Dushanbe as Stalingrad became Volgograd.

Not only Soviet personalities were chosen by the Union bureaucrats. As part of their strategy to create manageable national identities for the Central Asian SSRs, the authorities looked back at centuries-old literary figures that did not pose any threats to the established order. The Chagatai poet Alisher Nava’i (1441-1501) was bestowed the title of the founder of the Uzbek literature and his name was given to the then town of Kermine.

When the Central Asian republics became independent, they had to create a narrative and a cohesiveness as part of their state-building process, which was given shape by a newly-founded nationalism. Naming conventions became a target of the emphasis given to the national languages, as well as their new national narratives. In many cases towns and cities had Russian names while in others they referred to Russian or Soviet personalities. This did not fit in the new landscape post-independence and as a result a process took place in which original names were reinstated or new, indigenous ones were created for such purpose.

Kazakhstan faced the most difficult state-building process due to the diversity of its population, with almost as many Russians as Kazakhs. Nevertheless, the authorities gradually changed Russian names of cities and towns. Some of them reverted to their original Kazakh names, like Aktobe (Aktyubinsk), while others, like Atyrau (Guryev) and Zhanoazen (Novy Uzen), were given a brand new Kazakh name since they had originally been founded by the Russians. The preponderance of Russian amongst part of the population, especially in the north of the country, has also resulted in a bilingual method in places like Oskemen, which officially still retains its Russian name of Ust-Kamenogorsk. The approach taken by the Kazakh authorities in its state-building process can be seen in the way it has dealt with its urban centres: abandoning the Soviet legacy and encouraging a Kazakh identity without alienating non-Kazakh minorities.

Tajikistan also used the naming of towns and provinces as part of its state-building process but its situation was very different to that of Kazakhstan. President Rahmon’s constant reference to the Samanid Empire (819-999) found its echo on a territorial level when he renamed the town of Leninskiy to Somoniyon. In addition, a district that had also bore the name of Lenin was changed to Rudaki, the great Persian poet of the 9th and 10th centuries that has formed part of Tajik identity since the Soviet times.

In Kyrgyzstan, the most significant change was the reversion of Frunze to Bishkek, a variation of the original Piskhek, while in Turkmenistan nationalism turned the city of Charjuy or Çärjew, a Persian name meaning ‘four canals’, into Turkmenabat, meaning ‘city of the Turkmen’ adapting the Persian suffix –abad.

The Central Asian regimes, as any other authoritarian forms of government, also fell under the spell of the personality cult but to different degrees. The most recent example of this took place last year when Astana, Kazakhstan’s capital since 1997, became Nur-Sultan in honour of the country’s first president, Nursultan Nazarbayev. However, the most extreme case was that Saparmurat Niyazov, the first president of Turkmenistan, who turned the city of Krasnovodsk into Türkmenbaşy, in reference to the title he bestowed upon himself as the ‘leader of the Turkmen’. In addition, he dedicated the town of Kerki to this father, and thus named it Atamyrat, a decision that was reverted by his successor in 2017.

Tens of towns and cities in the Central Asian republics have changed names in the last century as a result of the policies of their rulers of the time, the ones mentioned above are just a selection. However, despite the efforts of the successive governments, they cannot force upon their citizens their use, and in many cases the inhabitants continue to refer to their hometowns with their old names. The question then arises about the effectiveness of such measures. Aesthetically they change the make-up of the country and can portray the desired image in the media, official communications and maps, but that does not necessarily permeate immediately into everyday life as old habits die hard. Babushkas, taxi drivers and bazar workers are a far more accurate thermometer to measure its success than statistics. It is them and not the authorities, regardless of their power, who have the last word.

5 comments on “What is in a name? The (re)naming of cities in Central Asia”