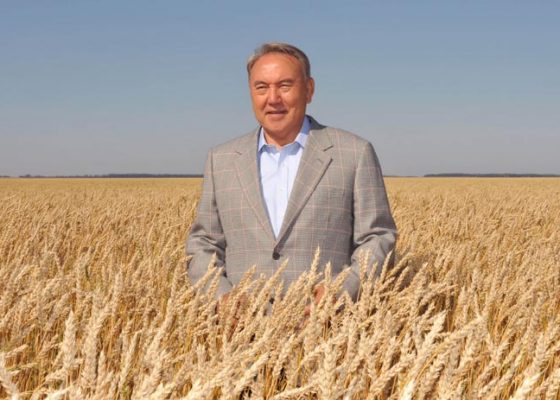 The Central Asian republics have been shaped by the personality of their leaders since their independence from the Soviet Union. From Kazakhstan’s Nursultan Nazarbayev to Uzbekistan’s Shavkat Mirziyoyev, they all have developed different leadership styles. Far from a monolithic authoritarian block, the republics present a wide range of political practises and styles as mandated from above. However, there is one thing all Central Asian presidents have in common: their love for wheat.

Blue skies, a golden field of wheat and a smiling ruler. Central Asia watchers have become accustomed to this image throughout the years. The different presidents of Kazakhstan, Tajikistan, Turkmenistan and Uzbekistan have all taken part in these photographs and it seems they won’t stop anytime soon. Besides providing material for jokes and memes in social media, the Central Asian leaders’ enthusiasm for the crop is a reminder that Soviet propaganda practices still play a role in the 21st century.

The Central Asian leaders owe their cereal antics to their Soviet predecessors. It was Nikita Khruschev who first posed for the photographers in a field of wheat during the Virgin Land campaign, an initiative to boost agricultural product by cultivating new lands. Those pictures aimed to transmit an image of abundance and success at a time of food shortages. Unfortunately for Khruschev, the art of photo editing was not advanced back then, something the current Central Asian leaders amply benefit from. Leonid Brezhnev continued his predecessor’s practises as part of his own propaganda.

Given that the authoritarian love for wheat has its origin in the USSR, it comes as no surprise that its successor states outside Central Asia have also played their part to keep it alive. This is especially true of Belarus’s Alexander Lukashenko and even of Vladimir Putin himself, among others. However, it is the Central Asian leaders who have perfected this art.

As their Soviet predecessors before them, the Central Asian leaders have used such images as part of their propagandistic efforts to show their country as a land of abundance where food is plentiful and no one goes hungry. To do so, the presidents have at their disposal a wide range of costumes: from the bureaucratic suit and tie to informal jackets or rural-looking chequered shirts. Then comes the matter of the pose. Some simply stand rigidly, and awkwardly, while others play with the grains or hold a bouquet of straws. In most cases the ruler is the only person in the picture, although sometimes he is accompanied by another government official or even a labourer. And then we have the photo editing, a valuable tool in their propaganda campaigns that is not always used wisely, leading in some cases to anatomical abnormalities.

To date, all present and past rulers Kazakhstan, Tajikistan, Turkmenistan and Uzbekistan have been immortalised in golden fields of wheat. Kyrgyzstan’s leaders are absent from the list. Kyrgyzstan can be considered to be a flawed democracy and authoritarian rule has not got hold of the country. Unless images of Kyrgyz presidents surface from obscure drawers, there seems to be no evidence of them having been part of the craze. Wheat-mania seems to be an authoritarian trend. In an open democracy it is likely that such fabricated and outdated images would be met with a mixture of incredulity and mockery. Without such criticism, and with the help outmoded propaganda officials, such images continue to emerge periodically much to the amusement of social media users around the world.

The obsession with wheat is not only limited to pictures. Monuments have been erected to the crop in the region and it has also taken the centre stage of literary praise, with Turkmenistan’s president, known for his prolific literary career, recently devoting a poem to the cereal. It is ironic that while he embraces wheat, he prevents his people form cultivating it in favour of cotton, which results in the country having to import Kazakh wheat.

Things are changing in Central Asia. Uzbekistan is opening to the world, civil society is awakening in Kazakhstan and the current pandemic is challenging governments. But we can be sure that, for the foreseeable future, wheat-mania will continue to flourish under Central Asia’s authoritarian leaders. Because, as the Turkmen leader puts it, “when you harvest wheat with your own hands or at the wheel of a combine harvester, special feelings awaken in your soul.”

1 comment on “In the fields of wheat: an authoritarian obsession”