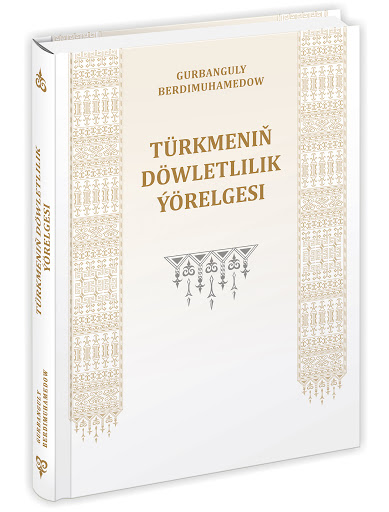 Turkmenistan’s president, Gurbanguly Berdymukhamedov, completed his 53rd book on August 5th, and it was subsequently released to the public with a ceremonious exhibition on September 5th.

Titled “Türkmeniň döwletlilik ýörelgesi” in Turkmen, it has been incorrectly translated into English by some Turkmen and western media as Spiritual World of Turkmens,[1] when it should actually be Traditions of Turkmen Statehood, which is the title used by the state website of Turkmenistan.[2]The confusion lies in direct translation to English. (Note: The book itself has not been translated to English.) According to state media, President Berdymukhamedov hopes to promote an understanding of Turkmen culture, “which made significant contributions to [the] development of global civilization.”[3]

This is not the first book crafted by a Turkmen president with such lofty ambitions to re-write the history of Turkmenistan and its people. Turkmenistan’s presidents have always had a penchant for writing and releasing books on all topics related to the country, including culture, history, religion, health, food, and animals—particularly the Akhal-Teke horse and Alabai sheep dog. However, the most notable book comes from Turkmenistan’s first president, Saparmurat Niyazov, with his 2001 release of Ruhnama. With the release of Berdymukhamedov’s new book, many speculate about his ambitions and the desire to expand his cult of personality among the nation, as his predecessor was able to do through Ruhnama. While he clearly imitates and expands upon his predecessor’s work by using revisionist Turkmen history and traditions, his goal is not to expand his cult of personality. Rather, the goal of Traditions of Turkmen Statehood is to unite the Turkmen people under his leadership by introducing Turkmen culture and traditions to the world.

President Niyazov’s book Ruhnama, translated as The Book of the Soul, dictates the moral and spiritual guidance of the Turkmen people. It rewrites Turkmenistan’s history by inflating its importance in global history, thereby engendering a unified spirit amongst the Turkmen people and solidifying the national identity. This is reflected when Niyazov describes—in great detail—Turkmen inventions as well as their scientific advancements, which were apparently appropriated by other cultures like the Arabs and Iranians.[4]

While the Ruhnama can be seen as a presidential attempt to build the Turkmen nation and identity after independence from the Soviet Union, it was also used as a tool to further integrate his personal narrative and history into the cultural foundation of society. For instance, he details the death of his father and mother, as well as the love he felt when receiving advice from his mother who was in the afterlife.[5] Niyazov used parts of Ruhnama to further memorialize his parents, especially his mother. He even renamed the month of April to Gurbansoltan, his mother’s name.[6] Depictions of his past, coupled with Turkmen revisionist history and mythology, was a way to inculcate his personal ideologies and beliefs into the development of the nation.

The Ruhnama galvanized the personality cult of Niyazov and had broad implications on Turkmen society. For example, the book took on a pedagogical role. It became a required school reading and even showed up on state driving exams. In addition, Niyazov claimed that children who read the Ruhnama three times a day would go to heaven.[7] Although it is not entirely evident in President Berdymukhamedov’s new book, some analysts believe he is trying to create his own form of spirituality and history of Turkmen culture, as Niyazov’s Ruhnama does.[8][9]

As his predecessor, Berdymukhamedov’s Traditions of Turkmen Statehood, strives to bring morality and wisdom to the Turkmen people through traditional folklore and historical stories. Imitating the Ruhnama, this new book places importance on health, science, and education of the Turkmen people.[10] Through historical—again, mostly revisionist—examples of Oguz Khan, the legendary forefather of the Turkmen,[11] Berdymukhamedov tries to reach the same level of national mythmaking as seen in Ruhnama, which also used Oguz Khan for Turkmen lore. Traditions of Turkmen Statehood emphasizes the need for unity and a hard-working society;[12] Berdymukhamedov believes this is possible by inspiring the younger generations of Turkmen laborers—as Niyazov did—but redirects the inspiration from the spiritual to the corporeal realm. “Labor makes man human,” Berdymukhamedov writes, arguing that Turkmens must not only have the physical aptitude to deal with tasks, but also requires a strong mentality and education.[13] Niyazov believed the same thing, but he believed this was possibly through a spiritual advancement.

While Berdymukhamedov’s book contains revisionist Turkmen history and a desire to accentuate his personal narrative, it does not reach the cultish personal narrative that Niyazov expounded in Ruhnama. Instead, Traditions of Turkmen Statehood allows the president to share what he views as the essential elements of Turkmen society—traditions, customs, and other knowledge that must be shared between generations. These collective principles create the foundation for Turkmen consciousness, a condition he names, “Turkmenism.”[14] However, health is one of the major factors discussed in his book, which is rather peculiar, given Turkmenistan is one of the few countries in the world claiming to be Coronavirus-free. Yet, Turkmenistan is rife with rumors of uncontrollable infections and hundreds dying.[15] Despite this, Berdymukhamedov states in his new book that health is “a key social value and development of the nation depends on it.”[16]

President Berdymukhamedov’s new book, while an interesting new chapter in the history of Turkmenistan’s textually prolific presidents, spends less time glorifying himself than Niyazov’s Ruhnama and more time espousing the values of Turkmen culture and a desire to share it with the world. Certainly, then, it will be interesting to see how his 54th book is integrated into Turkmen society.

Ryan Schweitzer is a graduate of Columbia University and an alumni of the Fulbright program in Uzbekistan. His research interests include security, identity formation, and nationalism in Central Asia