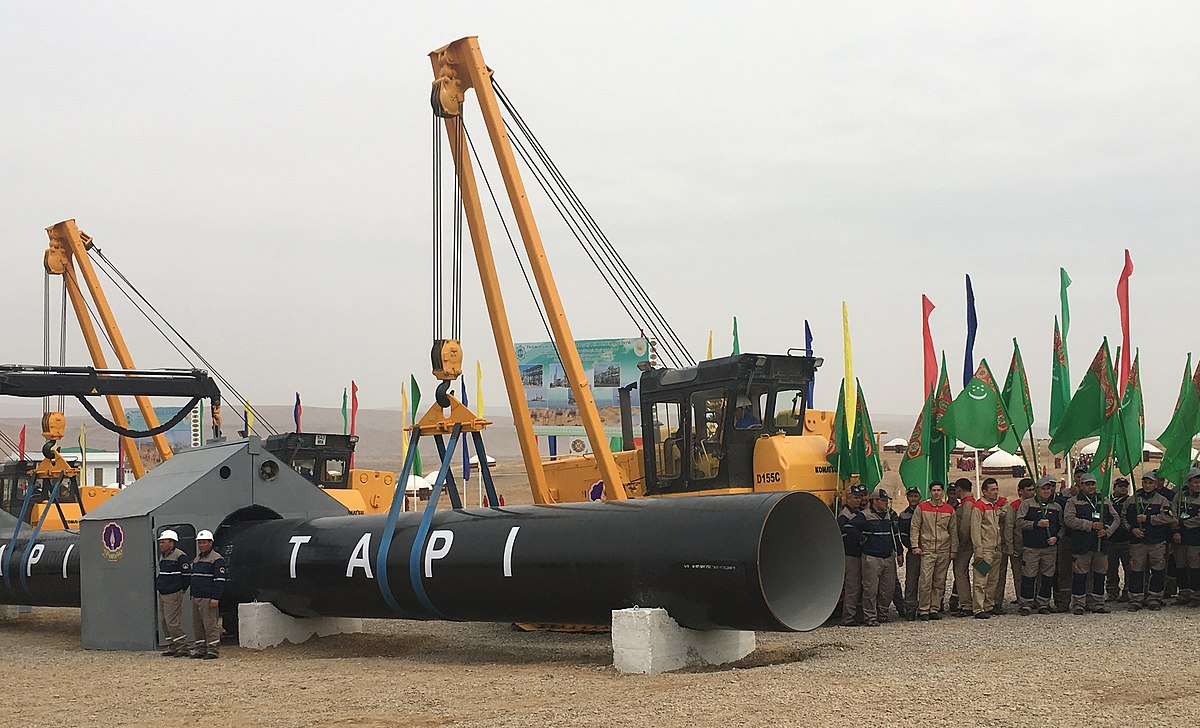 In the last months, several possible export routes for Turkmenistan’s gas have emerged. Much welcomed news for a country dependant on its natural gas, and that is going through hard economic times. However, questions remain about the feasibility of many of these alternatives.

With the fourth largest gas reserves in the world, the issue is not whether Turkmenistan can produce enough gas, but whether it can export it. For years, the country has had China as its virtually only client, with Beijing accounting for 86% of Turkmen gas exports in 2020. That is 27.2 billion cubic meters (bcm) out of the 31.6 Turkmenistan exported last year. Russia (12%), Kazakhstan and other CIS countries (2%) complete the picture. New markets may help Turkmenistan not only diversify its client portfolio but, more importantly, bring much needed cash.

If there is one project that is mentioned repeatedly when it comes to Turkmen gas that is TAPI. The objective of building a pipeline linking Turkmenistan, Afghanistan, Pakistan and India (hence the acronym), has been there, in different shapes, since the 1990s. There is now hope in Ashgabat that the new regime in Kabul will help make this vision a reality. Security, one of the main obstacles to TAPI, may be achieved. Financing, the other barrier, is another issue altogether.

The construction of TAPI would, in the best-case scenario, allow for up to 33 bcm of gas to be exported by Turkmenistan. This would effectively double the quantity of the resource Turkmenistan is currently selling. However, the price for such a project to be a reality would realistically be of $16 billion, with estimates of up to $40 billion. And nobody is wiling to pay that much for it.

However, a low cost alternative could be a possibility. As Steve Mann, former US Ambassador to Turkmenistan, wrote for the Atlantic Council, a shorter version of the pipeline could be feasible. Dubbed by the author as a Potemkin TAPI, this infrastructure would bring Turkmen gas to the Afghan city of Herat, 130 kilometres from the border. Nevertheless, this pipeline would be more of a propaganda victory than a practical one.

For Mann, “it is questionable whether Herat has or will have the gas infrastructure to actually use the gas.” Then there is the matter of the payment, at a time when the new Afghan authorities are struggling to pay for the electricity they import from their Central Asian neighbours. In the best-case scenario, Turkmenistan would be able to export some gas to western Afghanistan, although the quantities would be insufficient to help Ashgabat balance the books.

A region that does have the funds to pay for gas lies to the west of Turkmenistan. With energy prices rising and Russia and Algeria playing politics with their gas, Turkmenistan could be an alternative for the Old Continent.

As Bruce Pannier writes, most of the infrastructure is already there. The Trans-Anatolian Natural Gas Pipeline (TANAP) was built in 2018, it can take gas from Azerbaijan to Europe and its capacity could be expanded in the future to carry 60 bcm yearly. Then there is the Trans Adriatic Pipeline (TAP), built in 2020, that links with TANAP to deliver gas to Greece, Albania and Italy. But Azerbaijan does not produce enough gas to satisfy the current demand. Turkmenistan could.

For Turkmen gas to reach Europe, a Trans Caspian Pipeline (TCP) would need to be built. The cost estimated for such infrastructure is between $5 to $8 billion, significantly lower than TAPI, and it could carry around 30 bcm. Although a lower cost alternative presented by former US Ambassador to Turkmenistan Allan Mustard could carry between 10 and 12 bcm for a much lower price tag of up to $800 million.

Why is not the TCP or an alternative being built then? The answer to his question lies in Moscow and Tehran. Both parties have raised environmental concerns in the Caspian Sea but they are just an excuse to block a potential competitor in the world energy market. If Turkmenistan were to supply gas to Europe, Russia would see its leverage decrease significantly versus the European Union. The threat of using gas as a weapon would not have the same impact as Europe could source part of its gas from Turkmenistan. While TAPI’s main obstacle is financial, for the TCP and its variants it is political.

Selling back to Iran

Rather than finding new clients, it will be easier to Turkmenistan to export energy to old ones. Iran had been buying Turkmen gas since the late 1990s, but things got complicated in 2017 when Turkmenistan cut the supply accusing Tehran of owing around $1.8 billion of unpaid bills. Back then this meant that Turkmenistan was left with only one customer: China. Things are now changing.

Turkmen and Iranian authorities have improved significantly their relations in the last months. Back in September, the presidents of both countries met in Dushanbe during the Shanghai Cooperation Organisation summit. A month later, during a visit of the Turkmen Foreign Minister to Tehran, the Iranian Oil Minister said his country was interested in resuming gas and that “the debt to the Turkmen side will undoubtedly be settled and we are determined in this regard.”

Currently there are two pipelines linking both countries with a joint capacity of 20 bcm. Achieving the upper limit is unrealistic. But attaining a figure even below the peak of 10.2 bcm reached in 2011 would be welcomed news for Turkmenistan. They might not get cash for all their gas exports to Iran, given that bartering was used in the past, but it would be a win-win scenario for both parties.

Turkmenistan is an energy-rich country, but not all Central Asian nations are. Kyrgyzstan is one of them. Its reliance in the Toktogul hydroplant, coupled with drought and growing prices of coal, have forced Bishkek to look for alternatives elsewhere.

Kyrgyz President Sadyr Japarov made an official visit to Turkmenistan in late June. One of its main objectives was to discuss about the possibility of Ashgabat supplying gas and electricity to Kyrgyzstan. This was followed up days later by a conversation between the foreign ministers of both countries. Then in early November, the Chairman of the Cabinet of Ministers (i.e. Prime Minister) of Kyrgyzstan confirmed that negotiations are underway to buy Turkmen gas. But there is no pipeline that could transport Turkmen gas directly to Kyrgyzstan.

“We do not have direct gas pipelines with Turkmenistan, but we can get natural gas through Uzbekistan and Kazakhstan, because they have them among themselves,” said in summer a high ranking official in Kyrgyzstan’s Ministry of Energy and Industry. Uzbekistan seems to be the country that could perform the intermediary role, importing Turkmen gas and exporting its own gas to Kyrgyzstan. This was discussed by the Kyrgyz prime minister with his Uzbek counterpart last week.

It is still unknown how much gas Kyrgyzstan would be looking to import from Turkmenistan. The amount is not likely to be significant in overall terms, but once again at this stage any quantity should be good for Ashgabat. An additional benefit of such an arrangement would be an increased regional cooperation in Central Asia, which is always a positive development.

Uzbekistan could also be a potential importer of Turkmen gas for domestic consumption. Despite producing gas, and exporting part of it, Uzbeks have had to face gas shortages in the past. The situation became so acute in December of 2020 that the Uzbek president ordered to cut gas exports so they could be redirected to the national market. With last year’s situation in mind, an official of the Ministry of Energy recently said that “in case of abnormally cold weather and a shortage of own resources, gas may be purchased abroad to supply the population and socially important facilities of the republic.”

Turkmenistan would seem the natural choice to supply Uzbekistan. The infrastructure is already there and being used to carry Turkmen gas to Russia and China, via different pipeline systems. In addition, ties between Uzbekistan and Turkmenistan have improved significantly in the last years. Perhaps this topic was discussed by presidents Berdymukhamedov and Mirziyoyev during the former’s recent trip to Tashkent. If Uzbekistan ends up importing Turkmen gas this winter, the arrangement would be of a temporary nature. The amount would also probably be modest. But it would show Ashgabat there are other markets where to sell gas, and some of them may be closer than they thought.

Opening new markets and increasing gas exports is not something that can be achieved overnight. It requires a long-term strategy that it would seem Turkmenistan has been lacking. Ashgabat will not find a miraculous market for its gas that will require little or no investment, be fast to implement and that will absorb large amounts of gas. However, there are alternatives that could help Turkmenistan, to a certain extent, diversify its exports and bring in some much-needed revenue.

TAPI and any form of TCP would be the most important, but they are also the most unlikely to be realised, at least any time soon. Iran and the Central Asian markets are more feasible as alternatives but are also the most modest in terms of volumes.

Turkmenistan continues to be tied to Beijing and remains unable to fulfil its potential as a supplier of natural gas. It is difficult to see how this can change in the near future. However, Turkmenistan is in a better position now that it was a year ago. The regime change in Afghanistan has renewed interest in the chimeric TAPI, Europe needs energy alternatives to Russia amid growing prices, ties with Iran are on the mend and gas exports could resume soon, and Central Asia could emerge as limited but near market. Some of these projects may never become a reality, but at least it would now seem that Ashgabat has options, something which it did not until very recently.

(Main picture by Allan Mustard, sourced from Wikimedia Commons – no changes made)

0 comments on “New, and not so new, alternatives for Turkmen gas”