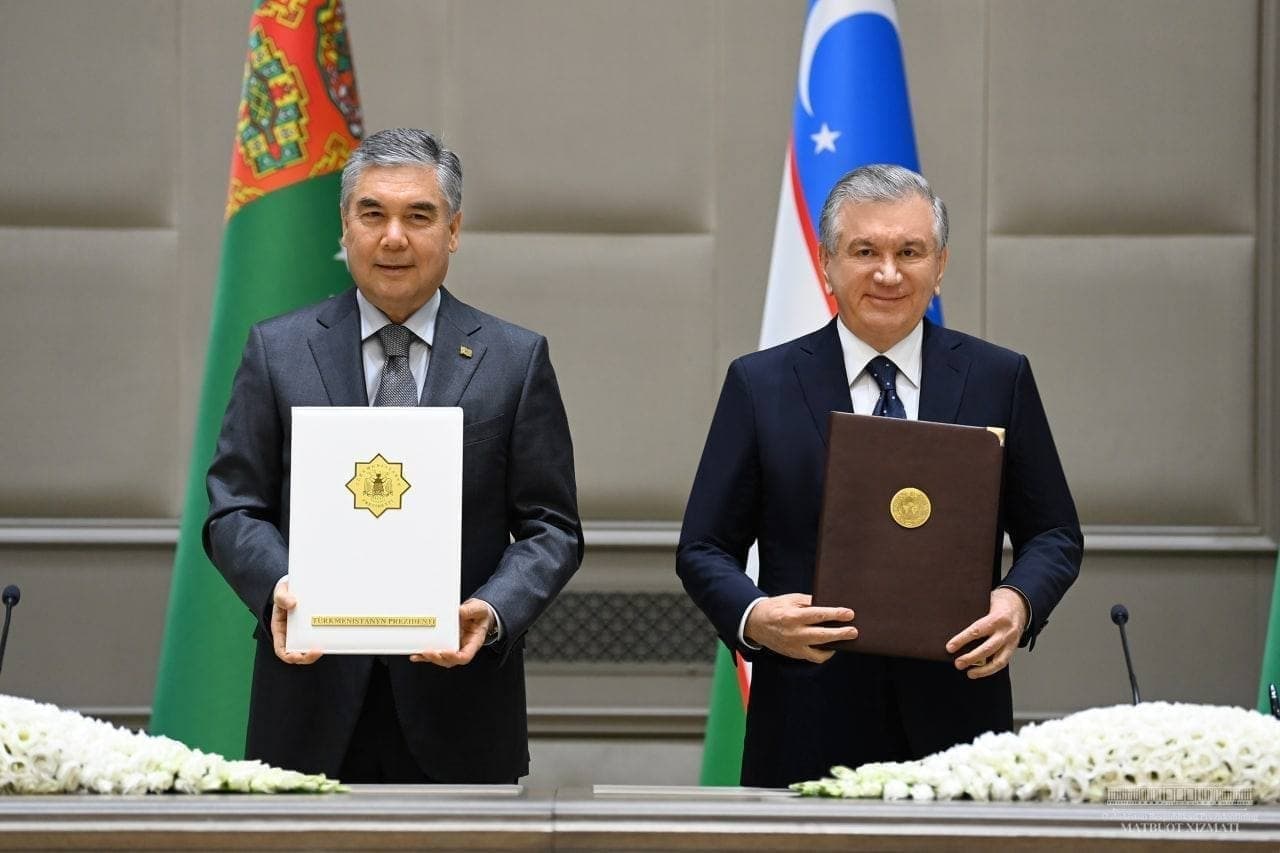 On October 4 Gurbanguly Berdymukhamedov landed in Tashkent as part of a two-day visit to Uzbekistan. His counterpart, Shavkat Mirziyoyev, greeted him as soon as the Turkmen set foot on the runway. This was the third time this year that both presidents met face to face, a sign of the improved ties between both countries. Will the potential of Uzbek-Turkmen relations finally be realised?

Berdymukhamedov and Mirziyoyev have been seeing much of each other lately. Back in April, the Uzbek president crossed the border to personally present his condolences to his Turkmen colleague for his father’s death. A gesture not done by any other head of state and that must have been appreciated by Berdymukhamedov. Four months later, in August, Mirziyoyev once again flew to Turkmenistan, although this time as part of the wider Avaza summit of Central Asian presidents. In October it was the Turkmen’s turn to return the visits.

This short trip, official ceremonies aside, focused on the practical elements of Uzbek-Turkmen relations. Both presidents signed 23 documents that covered most elements of bilateral ties: from trade to water management. A few of the key agreements mentioned include the establishment of a border trade zone, the creation of an annual forum of regions, infrastructure projects to improve transportation and the simplification of business visa procedures.

In regards to foreign affairs, both leaders seemed to be of the some opinion when it came to Afghanistan, as reported by RFEL/RL’s Bruce Pannier and Eurasianet.

At a personal level both presidents seemed at ease during the different events, whether that was greeting each other or enjoying a concert of by children. In Central Asia, personal relations between leaders are key, so the appearances from that perspective were positive.

Prior to Berdymukhamedov’s arrival, Tashkent hosted the Uzbek-Turkmen Economic forum. During the event, the creation of joint ventures on both countries was highlighted as an area of opportunity. Within the forum’s framework, Uzavtosanoat and Turkmenistan-Motors signed a memorandum to produce vehicles in Turkmenistan.

While October 4 and 5 produced a flurry of activity, signing ceremonies and announcements, a significant part of the groundwork had been done earlier in the year. Prior to the Avaza summit in August, meetings between ministers from both countries took place. The aim of these encounters was to discuss cooperation agreements. The results of these talks became apparent last week. For instance, on August 5 the Uzbek Minister of Investments and Foreign Trade Sardor Umurzakov and Turkmen Deputy Prime Minister Serdar Berdimuhamedov already mentioned the establishment of a border trade zone. This initiative materialised during the Turkmen president’s visit to Uzbekistan.

Similarly, aspects of trade cooperation were already discussed in September during the Uzbek-Turkmen Intergovernmental Commission that took place in Tashkent. The meeting, chaired by Umurzakov and another Turkmen Deputy Prime Minister, focused on the development of transport corridors and the provision of mutual tariff preferences for 2022. Unsurprisingly, these topics were covered last week.

The announcement of the creation of a forum of regions was also preceded by an event in September, when leaders of the Lebap and Dashoguz regions of Turkmenistan paid a visit to the Uzbek regions of Bukhara and Khorezm, respectively.

The signature of the documents was therefore the culmination of work and conversations held by ministers for both countries during, at least, this year. While the initiatives announced are a step in the right direction, they still fall short of the possibilities strong Uzbek-Turkmen ties could bring.

Despite sharing a common border of over 1,800 kilometres and one of Central Asia’s greatest rivers, the Amu Darya, Uzbekistan and Turkmenistan have barely scratched the surface when it comes to exploring the benefits of bilateral relations. During Saparmurat Niyazov and Islam Karimov’s presidencies, the animosity between both leaders prevented the development of such ties. This even including accusations by Niyazov of magnicide attempt by Uzbekistan. It would seem the trend has reversed since the coming to power of Mirziyoyev in Uzbekistan and, perhaps, to the dire economic situation in Turkmenistan that forces authorities to look for alternatives elsewhere.

In 2016, the year Mirziyoyev took over from Karimov, trade between both countries stood at $183 million. Four years later, in 2020, the figure had increased to $527 million. So far in 2021 it seems like the number will grow by 25% in comparison to 2020. The symbolic figure of $1 billion is has been mentioned by Uzbek and Turkmen authorities as the next milestone to be achieved.

To reach the desired amount, it is key to facilitate transit between countries at the borders, from visas and permits to speeding up the actual border checks. The establishment of free trade zone at both sides seem to be a step in the right direction. This is something which Uzbekistan already mentioned it would do back in 2020 in the Kungrad district of Karakalpakstan, although so far it is had not been announced where the common border trade zone would be located

While Tashkent and Ashgabat lay far away from the common border, both countries have important urban centres close to it. Uzbek cities like Bukhara, Urgench and Nukus are only tens of kilometres away from the neighbouring country, and the same can be said for Turkmenistan’s Turkmenabat and Dashoguz. These regions could benefit significantly from increased cross-border trade. An estimate puts the population of the four Uzbek and two Turkmen border regions at 11 million. But while that is not realistic, given some of the provinces are large and towns can be far away from the border, it gives and indication of the relative size of domestic markets.

Connecting Uzbekistan to the world (via Turkmenistan)

However, it is Turkmenistan’s location where its most important asset may lay for Tashkent. Famously being double land-locked, Uzbekistan, especially under Mirziyoyev, is looking for routes to connect with markets further afield. This was the reason behind the Central and South Asia Connectivity Summit held this summer in Tashkent and the Uzbek administration’s pragmatic stance in relation to the Taliban in Afghanistan. Eventually this would allow Uzbekistan to reach Pakistani ports in the Arabian Sea and even India. However, there is a shorter and more stable route.

Instead of having to traverse Afghanistan, Uzbekistan could reach Iran and its ports in the Persian Gulf via Turkmenistan. A route that bypasses a potentially unstable Afghanistan and that would not only link Uzbekistan to Iran but also to the Persian states and the Middle East. From the Turkmen perspective, Turkmenistan could benefit from transit fees while highlighting its importance as a regional hub linking the Middle East with Central Asia, or more ambitiously, albeit more difficult, between Europe and China.

For this to happen, railway connectivity between Uzbekistan and Turkmenistan must be improved, as well as railway infrastructure within Turkmenistan. Still, it would seem an easier task than building the Mazar-e Sharif – Kabul – Peshawar railway.  If the Turkmen regime had shown itself as a reliable partner, something with which Tajik authorities and drivers would disagree, there is no reason why this route would not be explored (notwithstanding the peculiarities of sanctioned Iran), and even preferred.

Iran is already benefitting on the opposite direction, with exports via rail through its border town of Sarakhs trebling this year, with Uzbekistan and Turkmenistan accounting for 45% and 41% of the exports respectively. One of the main liabilities of this route continues to be role played by the Turkmen authorities and the arbitrariness of many of its decisions. However, the potential is there to be explored.

Another interesting route that is yet to be fully developed would link Uzbekistan with the port of Turkmenbashi in the shores of the Caspian. From there, goods reach Azerbaijan and Russia via ships before reaching European markets.

Uzbekistan and Turkmenistan have been for too long distant despite being neighbours and sharing a lengthy border. Policies driven by personal preferences rather than national interests have hindered the development of close ties. It seems that this is starting to change. A stronger cooperation between both countries can bring economic, trade, environmental and geopolitical benefits for the parties involved, while also helping the local population. There is still much room for improvement, but if the leaderships of both countries are committed to it, they could tap into one of Central Asia’s most important bilateral partnerships that has not so far been fully explored.