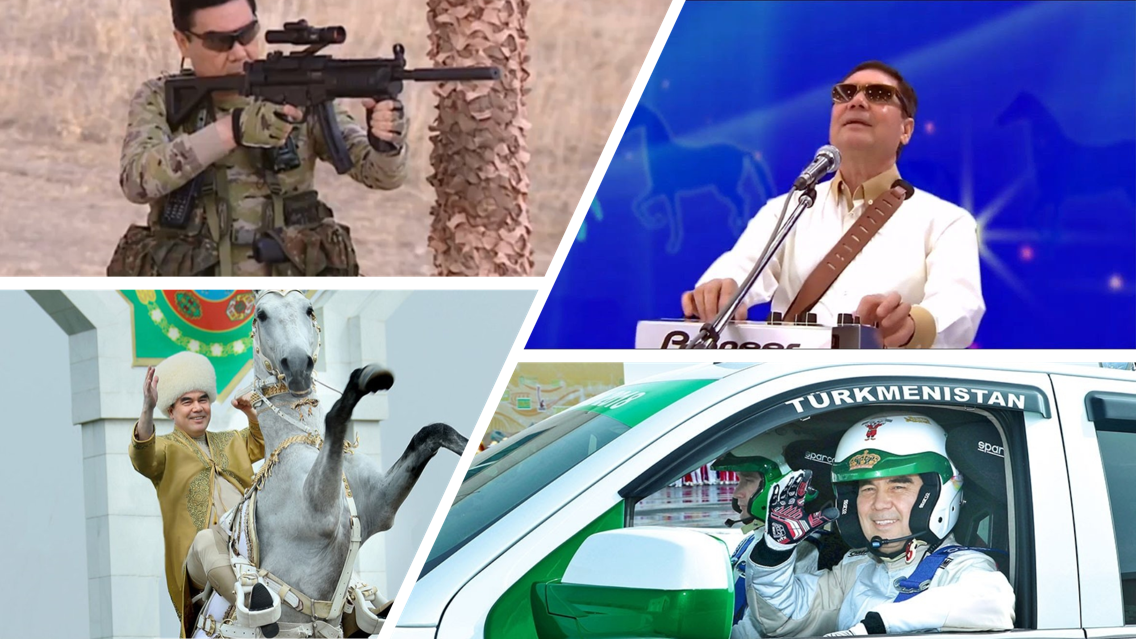 Five months after leaving the presidency, Gurbanguly Berdymukhamedov has relinquished being the centre of attention in favour of his son. It would now seem like his public role is mostly limited to menial domestic tasks and dealing with foreign leaders and visitors to Turkmenistan.

Flamboyantly riding a horse, shooting at targets dressed in full commando gear, drifting around the Darvaza crater or performing his latest song, Berdymukhamedov Senior’s antics became for years a usual sight in the Turkmen television. Many of them went viral on the Internet for the wrong reasons. However, since the dictator stepped away from the presidency, those acts have ceased.

Back in March, he handed the presidency to his son Serdar but remained chairman of the Halk Maslahaty, or upper chamber of the parliament. That doesn’t mean that he relinquished power altogether, but he did so nominally. While some events, like the sacking of his powerful aunt Gulnabad or the usual ministerial dismissals, indicate that Serdar is leaving his own mark, most things remained largely unchanged. It is likely his father still plays the pivotal role in ruling the country or, more importantly, protects him in the reduced world of the Turkmen elites.

Since giving up the presidency, we have not seen much of Berdymukhamedov Sr when it comes to his ritual eccentric appearances, compared to what we had grown accustomed to. However, literature remains one of his hobbies and in April he published his latest book. Its title, The Meaning of My Life, sounds like an epilogue to his life. Alleged health issues, including the one that may have caused his mysterious disappearance in the summer of 2019, were most likely the reason behind the power transition.

Besides writing, the 65-year old spends his time inspecting construction operations and issuing recommendations on a wide arrange of trivial issues, from doors for government buildings to designs for manhole covers. A pastime for a semi-retired former dictator who might still see a brand new city named after him.

When it comes to international relations, he has taken a role akin to that of a king in constitutional monarchies. He has been on the phone with foreign leaders and played the role of a host during the Caspian Summit, meeting and greeting the leaders of Russia, Iran, Kazakhstan and Azerbaijan. Like a symbolic head of state would do. During the summit, he received the calls of the presidents of Uzbekistan, Kyrgyzstan and Tajikistan, who wished him a happy birthday. Berdymukhamedov’s current role resembles, just somewhat, that of Nursultan Nazarbayev before the 2022 January protests.

After years being the centre of attention and showing off his alleged skills, it is surprising that Berdymukhamedov Sr has given up on them. The reason is obvious. His son is the present and he should be the one on the spotlight, making a case for himself and building his own personality cult. And he is trying. He has been seen riding a bike like his father or going to the gym, although he clearly lacks his predecessor’s showmanship.

While the father seemed to enjoy all those activities, it does look like the son would rather be at the dentist. Not treated by his father, who has been inactive in the dentistry trade for decades, it is safe to assume. But going back to Berdymukhamedov Sr, one does wonder how not being the only one hoarding the spotlight affects his ego after years purporting to be the fastest gun south of the Amu Darya.

Not one, but two Arkadags

What we are currently witnessing in Turkmenistan is the gradual emergence of the son’s personality cult at the same time as the father, whose cult reached new highs in a country where that is no mean feat, is still around. There is a clear continuation in the works. The same Soviet-style methods are being employed. Besides Serdar having taken over the usual stunts, although of the mild type so far, he is also getting a variant of his father’s title. If the former president is known as Arkadag (Protector), the current one is now being referred to as Arkadagly Serdar.

Time will tell how both cults will be able to coexist, but if these months are something to go by, Berdymukhamedov Sr will continue to be present doing his inspection rounds and keeping busy, but the son will be the, inexpressive, face of the Turkmen regime.

Gone are the days of the former president’s antics that, unbeknownst to him, made him meme material. Only social media users who were entertained by the surreal stunts, unaware of the lack of freedoms in the country, will miss them. Turkmenistan faces the same problems as before, but hopefully now it won’t be known for its president’s circus-like acts, but for the dire situation its citizens have to face.