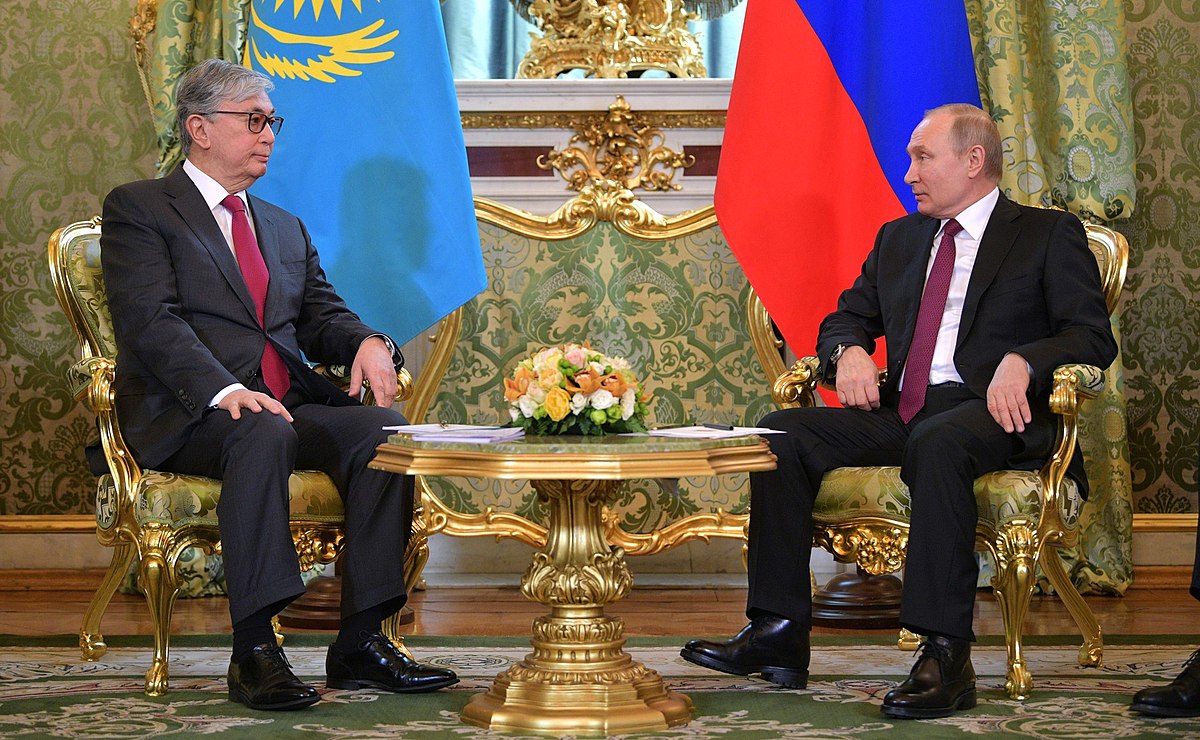 Central Asia is one of the regions most affected by Russia’s invasion of Ukraine. Its strong links to Moscow has put the Central Asian countries in a difficult position. They cannot be seen to support Russia’s actions, while at the same time they cannot openly oppose them either. Kazakhstan is in an especially delicate situation, but its president is mustering his diplomatic skills to weather the storm.

On February 24, Russia began a full-scale invasion of Ukraine. The war is bad news for Central Asia, a region with strong links to Russia at all levels. Each country will be affected differently but, given Moscow’s narrative, the conflict is especially worrying for Kazakhstan. It is the only Central Asia nation that shares a border with Russia and whose sovereignty has been questioned in the past by the Kremlin. Instead of remaining silent, like some of his neighbours, the Kazakh president has taken an active diplomatic role, calling for dialogue, offering to mediate and reaching out to all parties.

Kassym Jomart-Tokayev has been busy talking to foreign leaders these last days. On February 25, the day after Russia’s started its invasion of Ukraine, he met with the Russian Prime Minister in Nur-Sultan. Mikhail Mishustin was then in the Kazakh capital to attend the Eurasian Intergovernmental Council. The following day, he spoke on the phone with the President of the European Council, Charles Michel.

On February 27, it was the turn for the French President, Emmanuel Macron. The conversation took place “at the initiative of the French side.” Akorda, the Kazakh Presidential Palace, did not disclose the content of the conversations with Michel and Macron but it is safe to assume they talked about the war in Ukraine, and perhaps at the request of the Europeans. Up to that point, it would seem as Tokayev, as his Central Asian counterparts, was just watching events unfold and calculating what to do.

Then on March 1, the Kazakh president took a step forward and urged Russia and Ukraine to reach an agreement through negotiation. The speech was pronounced at the 22nd extraordinary congress of the ruling Nur Otan party (renamed Amanat). “A bad peace is better than a good war,” stated Tokayev. His words were then quoted in his Twitter account in English. It was a message clearly aimed at a foreign audience. But what was more relevant in his tweet was the fact that he offered to mediate in the conflict.

The following day, Tokayev spoke on the phone both with Russia’s Vladimir Putin and Ukraine’s Volodymyr Zelensky. The message coming from Akorda in both conversations was similar. To the Russian, Tokayev “stressed the exceptional importance of reaching compromise agreements during negotiations”. To the Ukrainian he stated “the importance of reaching an agreement through negotiations in order to stop and cease further hostilities in Ukraine” and agreed humanitarian cooperation. Of course, the official press statements do not necessarily capture everything that was discussed nor the tone, but they do give an indication of Tokayev’s intentions.

In the meantime, Kazakhstan had abstained at the votes both at the UN General Assembly and the UN Human Rights Council, avoiding positioning itself against Russia. The Kazakh Deputy Minister of Defence had also announced that the conflict had “nothing to do with Kazakhstan” and that the country did not support either side.

A day after speaking with Putin and Zelensky, Tokayev was on the phone with his Uzbek counterpart. While neither the Kazakh nor the Uzbek sides mentioned Ukraine in their press statements, it can be expected that they spoke about it, especially given the conversations Tokayev had the previous day.

On March 7, Tokayev was again on the phone, this time to speak with Germany’s President, Frank-Walter Steinmeier. “At the initiative of the German side,” the conversation centred around Ukraine. Tokayev insisted on the need for a diplomatic solution stating that “all states should strictly adhere to the norms and principles of the UN Charter.” Delicately avoiding condemning Russia’s aggression (“the Ukrainian crisis is quite complex in its origin”), he declared Kazakhstan was ready to provide humanitarian assistance to the Ukrainian people. He also added his country had helped evacuate over 650 Europeans from Ukraine.

Since the Russian invasion of Ukraine, Tokayev has been the Central Asian leader that has reached out, or been reached by, the most by the West. He has also proposed his country’s mediation, a more plausible offering than Kyrgyzstan’s half-hearted attempt. As per Tokayev’s comments, we might see soon Kazakh humanitarian aid delivered to Ukraine, which would be a first among its Central Asian neighbours.

At the same time, Tokayev has also been careful not to condemn Russia’s invasion of Ukraine. Moscow’s aggression must have been received with a gloomy mood in Nur-Sultan. Both countries share the second longest land border in the world. Kazakhstan’s statehood has been questioned by Putin in the past, and irredentist claims surface every now and then from Russian politicians. Not to mention the close economic ties between the countries, from Kazakh oil exports that transit Russia to remittances and the heavy toll paid by the Kazakh tenge after the ruble’s collapse. And it was only a few months ago that Russia intervened in Kazakhstan through the Collective Security Treaty Organisation (CSTO) to back Tokayev’s regime amid the protests that shook the country.

Central Asian countries are in a difficult position. As the human rights lawyer Steve Swerdlow said, “they are caught between a rock and a hard place.” It is in these times of crisis when skilled diplomacy is needed, and this is one of Tokayev’s strengths. A career diplomat that served twice as Kazakhstan’s Foreign Minister (1994-97, 2002-07), Tokayev is taking a relatively active role in the crisis, given the country’s delicate geopolitical situation, to lessen the impacts of these events whatever the outcome might be. He is portraying himself as a cooperative partner to the West, given the limitations, as well as avoiding any opposition to Russia.

On the other extreme we have Kyrgyzstan’s Sadyr Japarov, who has implicitly positioned himself closer to Moscow and thus earned Zelensky’s rebuff. Meanwhile, Uzbekistan, which in the last years had grabbed headlines due to its proactive foreign policy, has remained strictly neutral and avoided any attention.

We are only starting to see the impact the war will have on the Central Asian nations. While the economy is the main and most immediate main worry, the invasion will also have significant political reverberations across the region. If it is successful, Kazakh authorities may see it as an uncomfortable precedent against its own sovereignty. It is in this context that we should also see Tokayev’s role these days, trying to defuse the conflict while at the same time showing itself as a useful partner to the West. All these notwithstanding the limitations of taking a neutral stance and avoiding upsetting anyone in the Kremlin. A difficult balancing act that will require all of the Kazakh president’s diplomatic skill and experience.