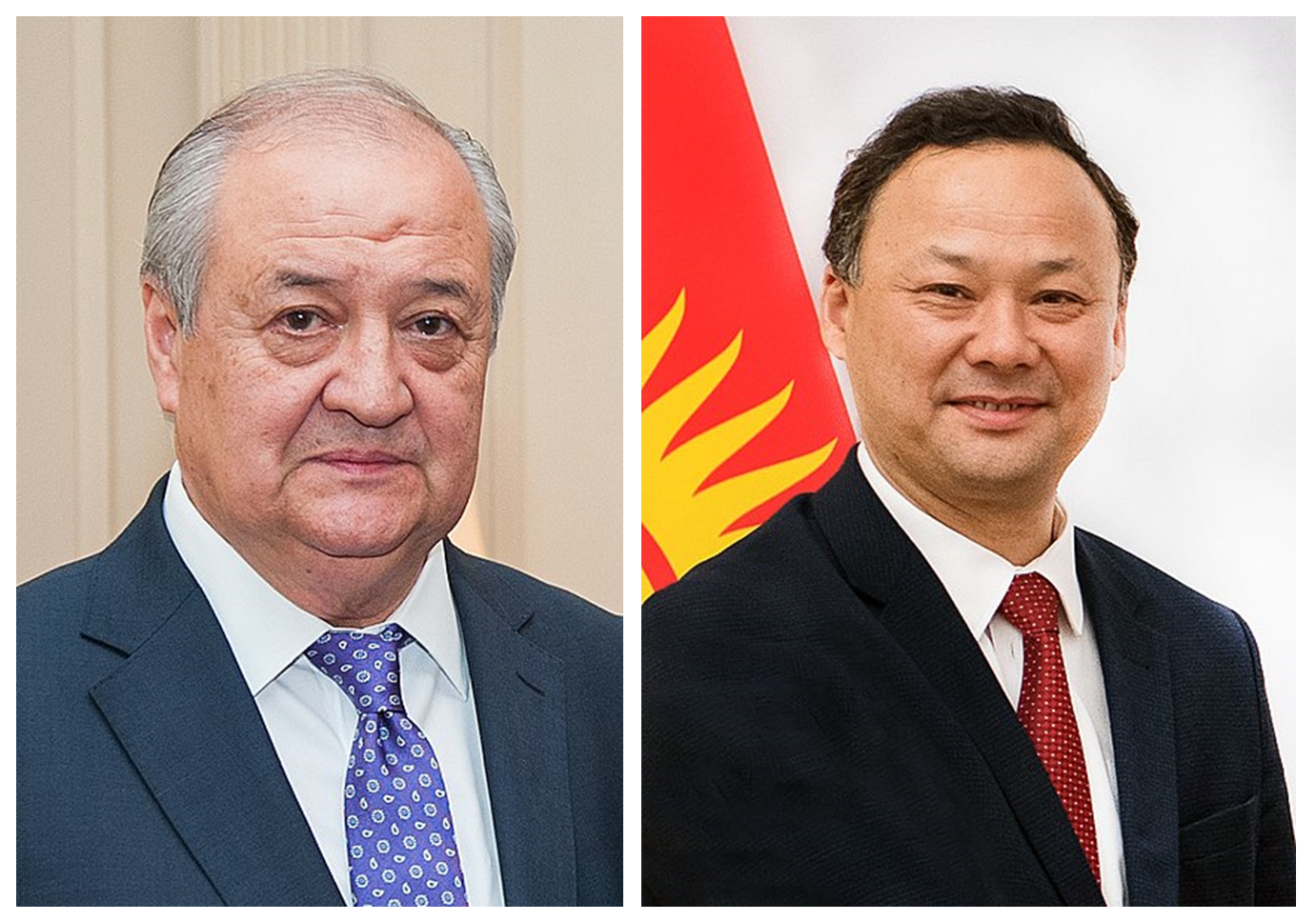 In a matter of days, two of Central Asia’s Foreign Ministers were dismissed. At a time when diplomacy is of utmost importance for the region, with the war in Ukraine far from over and pressure to the countries in the region being exerted by both sides of the conflict, Uzbekistan and Kyrgyzstan will have to be represented by new top diplomats. The timing of the move does not appear to be a coincidence and could be linked to the war, with Moscow playing a role in the resignations.

On April 22, Ruslan Kazakbayev was relieved of his post as Kyrgyzstan’s Minister of Foreign Affairs. Six days later, Uzbekistan’s Abdulaziz Kamilov stepped down as the country’s top diplomat. Two officials with different careers, the Kyrgyz had been minister for less than four years (2010-2012 and 2020-2022) while the Uzbek had spent 19 years on the job over two stints, but they met a similar fate in the space of a week.

“You have to respect the host… in every sense”

Ruslan Kazakbayev became Minister of Foreign Affairs in October 2020 following the unrest the led to the rise to power of Sadyr Japarov. Kazakbayev was no stranger to the post as he ad already been Foreign Minister for two years following the 2010 revolution. From the very beginning, the career diplomat was not welcomed by Moscow.

On October 23 Ruslan Kazakbayev, who had barely been on the job for nine days flew to Moscow to meet with his Russian counterpart, Sergei Lavrov. The purpose of the trip was ultimately to explain what had happened in Kyrgyzstan and get Moscow’s blessing. However, things did not go according to plan for the Kyrgyz. Lavrov announced that Kyrgyzstan would not receive the financial aid that had been pledged to the previous government. The Russian’s anger became visible when Kazakbayev was asked a question in Kyrgyz by a journalist. Lavrov snapped. “Excuse me,” he interrupted, “you still have to respect the host, OK?… In every sense.” Kazakbayev did not get off to a great start with Lavrov, of that we can be certain.

Six days after Kazakbayev’s trip, Japarov sent another delegation to Moscow. The group, led by Kazakbayev’s predecessor, Chingiz Aidarbekov, was awkwardly ignored by the Russian authorities. Aidarbekov returned to Bishkek empty-handed and Japarov had no alternative but to accept the humiliation. It is likely that, following what had happened, Japarov had tried to smooth things with Aiderbekov, who at his time as minister had already interacted with Lavrov, but it did not work out.

Kazakbayev spoke with Lavrov multiple times the following year. Whether in person, like at the 2021 CIS Foreign Ministers Council meeting, or over the phone following the violence at the Kyrgyz-Tajik border and the Taliban takeover of Afghanistan. What can be interpreted as Moscow’s veiled support of Tajikistan in the border conflict must have raised concerns in Bishkek. More recently, Kazakbayev saw his Russian counterpart in Moscow in March 2022 to mark the 30th anniversary of the establishment of diplomatic relations between both nations.

Then on April 22, Lavrov met with all the Central Asian Foreign Ministers. And that very same day Kazakbayev was dismissed.

The timing of Kazakbayev’s exit raises questions about the reasons behind it. It is clear his first venture to Moscow was short of disastrous, but there had been no public snubs since then. However, that his dismissal took place just after the last meeting is suspicious, to say the least. The most plausible explanation is that Japarov offered Kazakbayev’s head, metaphorically, to Moscow to placate the Russians and to show their implicit backing to Russia’s policies. As the renowned Central Asia expert Bruce Pannier put it to Blue Domes: “a change in stance required a change in spokesperson.”

Kazakbayev’s successor is an interesting choice. Jeenbek Kulubayev is a career diplomat specialised in China. A graduate of the Moscow Military Institute and the Diplomatic Institute of the Chinese Foreign Ministry, Kulubayev has been Advisor to the Kyrgyz embassy in Beijing (1998-2000), Deputy Executive Secretary of the Shanghai Cooperation Organisation (2004-2006) and Ambassador to China (2009-2013), among other roles. If Bishkek wanted to show its commitments towards Russia, another diplomat would have been better suited to convey that message. Kulubayev’s appointment indicates that Bishkek’s priorities lie with its large Asian neighbour, and not necessarily with Russia.

A last service to Uzbekistan?

On March 17 Abdulaziz Kamilov delivered what became his last speech as Foreign Minister at the Uzbek senate. The veteran diplomat stressed that Uzbekistan recognised the independence, sovereignty and territorial integrity of Ukraine. “We do not recognize Donetsk and Lugansk as independent republics,” added Kamilov. A clear message to Moscow of Tashkent’s position.

That was Kamilov’s last action as Minister of Foreign Affairs. Two days later, he disappeared from the public eye. The official explanation referred to his health, which obliged him to seek treatment abroad. It was a reasonable excuse due to his age (74 years) but the timing of it raised eyebrows.

Weeks passed and nothing was known about Kamilov’s state. Rumours started to circulate about his upcoming resignation and his potential replacement. Sardor Umurzakov, the Foreign Trade Minister, looked poised to take Kamilov’s place. There were even indications of merger of both ministries, applying the same model as in Australia. Umurzakov’s future role started to become evident when he filled in for Kamilov in the April 22 meeting with Lavrov and the other Central Asian Foreign Ministers.

Days later, on April 27, it was announced that Kamilov was stepping down from his role. It was not Umurzakov who took Kamilov’s place. This task fell to Vladimir Norov, who is now Uzbekistan’s acting Minister of Foreign Affairs. A seemingly transitional figure, Norov had already served as the country’s Foreign Minister (2006-2010), after the notorious Andijan massacre, and had more recently as Secretary General of the SCO (2019-2021). A veteran official that will have to navigate the current choppy waters of global diplomacy.

Abdulaziz Kamilov leaves an important void in Uzbekistan’s foreign policy. In Uzbekistan’s three decades of independence, he has been one of the country’s longest-established figures. He became Minister of Foreign Affairs in 1994, post he held until 2003, and then again in 2012. Between 2003 and 2010 he served as Uzbekistan’s Ambassador to the United States. In addition, Kamilov has been close to power in the country even before its independence, as it can be inferred from his marriage to one of the daughters of the Uzbek Soviet leader Sharaf Rashidov.

“He has dominated Uzbek diplomacy to a degree not seen elsewhere in Central Asia […] As we say, he leaves big shoes to fill” tweeted Laura Kennedy, a former US Ambassador to Turkmenistan and career diplomat.

What was the reason behind Kamilov’s exit? The most plausible reason can be found on the speech he delivered back on March. Kamilov made Uzbekistan’s position clear: recognition of Ukraine’s sovereignty and territorial integrity and the disregard of the Russian-backed republics in eastern Ukraine. It was the strongest stance we had heard from Tashkent since the beginning of the war. But it served the purpose of letting Moscow know where Uzbekistan stands and the red lines it will not cross. A message that must have displeased many in the Kremlin.

Kamilov was not sharing his opinion on the matter. He was announcing his country’s position in the conflict, a message that can only have come from the president himself. Being a veteran diplomat, he must have known that he was digging his own political grave with those remarks. Moscow would certainly ask for something in return. And he probably knew it would cost him his job. After heading the Ministry of Foreign Affairs for almost two decades, and at 74 years of age, it is a way to go out with a bang, providing a last service to his country.

It is not like Kamilov will disappear altogether. He has been rewarded with a token position, Deputy Secretary of the Security Council for Foreign Policy and Security, and will certainly continue to be around President Shavkat Mirziyoyev.

Kamilov’s exit is also symbolic. He was one of the longest serving top officials in the Uzbek government whose career stretched back to the early Karimov days. Mirziyoyev, himself a product of the same era, has been naming in the last years a younger cohort of ministers. If his permanent replacement ends up being 44-year-old Umurzakov, it will continue this trend.

Before the Russian invasion of Ukraine, with Kazakbayev and Kamilov seemingly secure in their posts, it was a different Foreign Minister who appeared to be walking out the door. The power transition in Turkmenistan, in which Serdar Berdymukhamedov succeeded his father, seemed to also bring changes in the Ministry of Foreign Affairs.

Rumours in Turkmenistan pointed in February and March to changes in the government’s composition following Serdar’s expected victory in the elections. And the most significant affected Rashid Meredov, the country’s long-standing Minister of Foreign Affairs. These rumours surfaced prior to the Russian invasion of Ukraine, and continued to be present during the first weeks of the conflict. However, the change has not yet materialised.

Meredov has been heading Turkmenistan’s Ministry of Foreign Affairs since 2001. Like Kamilov, he has been able to stay in the job so long by avoiding getting dragged into power struggles and remaining focused exclusively on his job. So much so that Ambassador Kennedy labelled him “as hard-working an individual as I ever met”.

Accepting those rumours were true, and that the new president planned to dismiss Meredov, the geopolitical events may have changed his mind. Although Turkmenistan can always display its neutral status to stay on the side-lines of global conflicts, the war in Ukraine requires the best diplomatic skills one can muster. And Meredov, with over two decades of experience as Foreign Minister, time during which he built his contacts in Moscow, is the Turkmens’ best bet. An unprecedented international crisis seems to have extended Meredov’s tenure at the head of Turkmenistan’s diplomacy.

No time for Foreign Ministers

The Russian invasion is testing the balancing acts and diplomatic skills of the Central Asian governments, some more than others admittedly. Kazakhstan is at the forefront of this, while Tajikistan has not to worry about it due to its pro-Russian stance.

We have already started to see two prominent casualties because of this delicate situation. One of which, Kamilov’s, is more than significant. If at the height of the pandemic being the Minister of Health was the hottest seat in any cabinet around the world, this dubious honour in Central Asia now falls to the Ministers of Foreign Affairs.