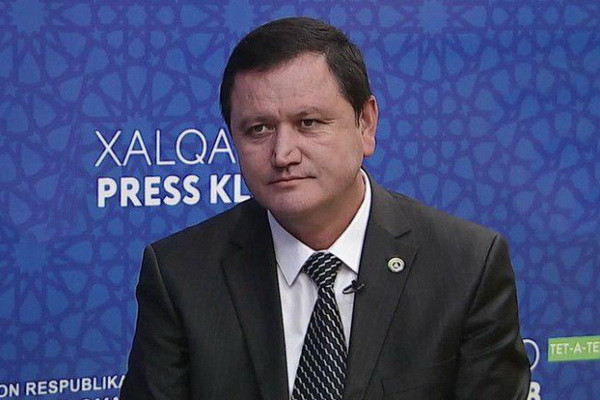 The former controversial governor of Fergana will abandon his post in the eastern region for a ministerial office in Tashkent. It is still unclear if his new job as Deputy Prime Minister is a promotion or a way to keep him out of the spotlight.

Shuhrat Ganiev’s term as the governor of Fergana has come to an end after 9 years heading the province. As reported by Gazeta.uz, Ganiev has been appointed Deputy Prime Minister in charge of the agriculture and food sector, taking over Uktam Barnoev who recently died of COVID-19. Ganiev is in turn substituted by Khairulla Bozorov, until now the governor of the Namangan region.

The new Deputy PM is a controversial character. During his time heading the administration in Fergana he became notorious for his abrupt behaviour full of threats and abusive language. A year ago, Ganiev was reprimanded by the Senate after an audio was posted in social media in which he threatened his district governors with removing the headscarf of women in their areas wearing them and “shoving it in your mouth”.

The warning by the Upper House had no effect on him and not long after, in another leaked audio,  Ganiev could be heard using a similar tone with beards. His particular crusade against long beards, which he classified as “ugly”, in a similar tone, led to Blue Domes to dub him the “Barber of Ferghana.”

More recently, Ganiev was on the spotlight for his heavy-handedness when dealing with the inhabitants of the Uzbek exclave of Sokh, scene of violent clashes with neighbouring Kyrgyzstan. The governor was not welcomed in Sokh, an area long neglected by the authorities, and had stones thrown at him. Ganiev responded as one would expect him to do: by threating to isolate the exclave and to jail the demonstrators.

Ganiev’s possible removal from his post as the governor had been circulating in the media for some time. In summer there were even rumours that he had been dismissed, but that did not materialise. Rather than being fired, he has switched jobs, but to his benefit or detriment?

Despite being a PR liability at a time when Uzbekistan is trying to improve its reputation abroad, Shuhrat Ganiev had remained in his post until today. Why? As RFE/RL’s Bruce Pannier says, “Ganiev appears to be one of those Uzbek officials who for some reason is impossible to fire.” Far from being a country where the president enjoys unrivalled power, Uzbekistan is a nation with a complex power structure, with multiple actors that play key roles from different walks of life, from politicians to businessmen and mafia bosses. This could explain why it has taken so long for the Uzbek president to remove Ganiev from Ferghana’s governorship.

Without insider information, it is hard to know if this move to Tashkent will benefit him or not. On the one hand he relinquishes control of one of Uzbekistan’s most populous regions, where he had certainly created his own power network, given that before being appointed as the governor in 2011 he had served for three years as deputy governor. On the other hand, in Tashkent he will be closer to the centre of power and will enjoy the post of Deputy PM. However, so far it looks like he has more to lose than to win.

There is another reading to his appointment. By having him in the capital, is the president following Michael Corleone’s advice to “keep your friends close, and your enemies closer”? By uprooting him from Ferghana Shavkat Mirziyoyev could also be demonstrating his authority. Or perhaps simply he found a comfortable post for Ganiev where would not make the headlines for the wrong reasons.

Regardless of the reasons behind the move, it will be worth keeping an eye on Ganiev’s future behaviour.