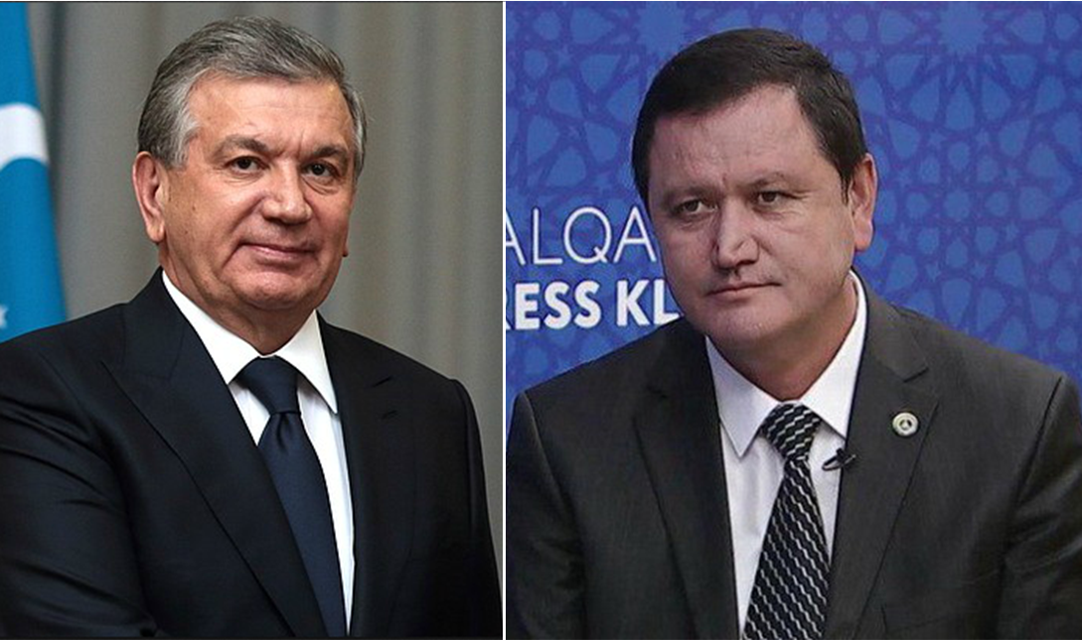 During a trip to Ferghana, the Uzbek president excused the behaviour of the region’s controversial former governor and showed his appreciation for his work. The compliments given by Shavkat Mirziyoyev to his notorious official raise questions about the actual will behind the country’s reforms.

“Some people like Ganiev, some don’t” Mirziyoyev said during a recent visit to Ferghana. “He has been with me since the moment I became prime minister. His main advantage is that he is an honest, pure person.” The individual the president was referring to was no other than Shuhrat Ganiev, a deputy prime minister known for his aggressive language and behaviour towards his subordinates and citizens. A politician who threatened his district governors with shoving headscarfs in their mouths and ordering farmers to shave.

“I am pleased with him. Yes, they say that he is rude, but if everyone likes the hokim [governor], there will be no order.” This last sentence from Mirziyoyev can easily debunk the narrative his government has created in the last years of a reformist Uzbekistan.

By justifying Ganiev’s behaviour and appealing to order above the citizens’ preferences, the president seems to favour those who rule with an iron fist. Such statements contradict the message the Uzbek authorities are trying to send, especially abroad, that things are changing in Uzbekistan. Mirziyoyev himself was known for swearing at and threatening subordinates during his time as prime minister. It would seem that little has changed since then.

The president further excused Ganiev by saying that “not giving a second chance to a leader is treason.” He seemed to forget that the deputy PM’s bad behaviour is not a one-off episode, but rather a recurring theme.

Despite the worrying nature of Mirziyoyev’s words, they will not harm Uzbekistan’s reformist reputation of late. The international media and organisations do not pay attention to such statements related to domestic politics, reserving their articles for government announcement and initiatives that can catch the reader’s eye. These range from Uzbekistan’s proactive role in regional politics to its opening and touristic potential. However, by supporting Ganiev, Mirziyoyev is indirectly backing up those who are sceptical about his reforms and his will to change the country.

President Mirziyoyev’s kind words come as a surprise and raise questions about what lies behind them. His praise comes two weeks after he severely reprimanded Ganiev and threatened him with dismissal. This took place during the president’s visit to Bukhara in late January. While criticising the state of agriculture in the region he declared that “I also warned Ganiev that if the [agricultural] system is not set up properly, he will resign.” Yet some days later he flatters his minister.

Ganiev is not the only official who has been praised by Mirziyoyev lately. During the visit to Ferghana, he also lauded Prime Minister Abdulla Aripov saying that “he has a different attitude to his profession, he is an honest man.”

The approval of Ganiev and Aripov comes a week after the president bluntly dismissed two high-ranking officials. In a move designed to create uncertainty, he announced that one governor and one minister would be fired, and that we would disclose the names later in the week. In the end, those affected were the Minister for Sports and the governor of the Tashkent region.

What made Mirziyoyev change his mind regarding Ganiev? Did he want to curb any unrest among his officials after last week’s dismissals? Is he afraid of alienating them? Did he want to reassure Ganiev after his harsh words last month? Or is this just a presidential whim?

These events raise questions that are hard to answer given the nature of Uzbekistan’s elite and power structure. Despite being the president and wielding considerable power, Mirziyoyev still needs the support of other players within Uzbekistan. Is this driving his latest comments? What does surprise is the president’s support for Ganiev. The deputy PM has given him enough reasons to dismiss him, from being a PR liability to poor performance, but rather than doing so he moved him from Ferghana to a ministerial post in Tashkent. Is it because he appreciates his loyalty above all or simply because he cannot get rid of him?

Who is the «Barber of Ferghana»?

Shuhrat Ganiev become the centre of a PR scandal back in 2019. At that time he was governor of the province of Ferghana, a post he had occupied since 2011. In a series of leaked audios, Ganiev was heard threatening his district governors with shoving the Islamic headscarf in their mouth if he saw “a woman with such clothing in your official meetings, I don’t care if she’s a neighbourhood chief, a teacher, a businesswoman, an activist, a lawmaker.”

He was also recorded criticising beards and insulting those with facial hair, as well as ordering farmers to shave if they wanted to receive soft loans. This led Blue Domes to dub him the «Barber of Ferghana».

After his behaviour came to light, he was reprimanded by the Senate but no further action was taken. Then in 2020, he abandoned his governorship for a new appointment in the capital. Ganiev was made Deputy Prime Minister in charge of agriculture. The reasons behind the change, and whether it was a promotion or demotion, were unclear. However, during Mirziyoyev’s last visit to Ferghana, he declared that the post of Deputy PM has been entrusted to Ganiev “taking into account his knowledge, experience and honesty.” More kind words of the president to an official that certainly does not deserve them.