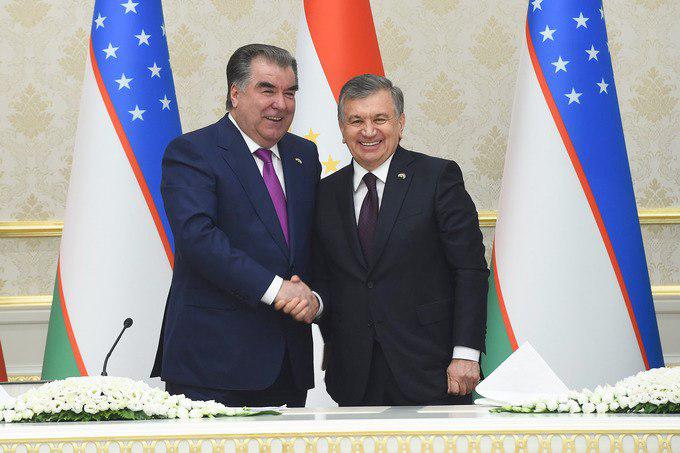 This summer’s visit of Uzbekistan’s Shavkat Mirziyoyev to Tajikistan is the latest development in the neighbours’ bilateral ties. For years, the Tajik and Uzbek governments had probably the worst relations among all the five Central Asian republics, but since the rise to power of Mirziyoyev the tone has changed and developments have started to take shape.

Despite the pandemic, 2021 so far has been beneficial for Tajik-Uzbek relations. In the first four months at least the same number of high-level encounters have taken place between officials from both countries.

Back in February, the Uzbek Foreign Minister, Abdulaziz Kamilov, visited Dushanbe and met with the Tajik president as part of a regional tour that also took him to Ashgabat and Nur-Sultan. A few weeks later, the Deputy Foreign Ministers held a videoconference with a focus on the opening of common borders, which had been closed since the start of the pandemic.

April has been another busy month regarding talks between Tashkent and Dushanbe. On April 21, the Deputy Ministers of Transport of both countries met in the Tajik capital to discuss the possibility of improving cooperation in the transport sector. Either in that same meeting or in a parallel one with officials from the ministries, the prospects of building a new railway link between Tajikistan and Uzbekistan were also explored. Later that week, on April 24, Uzbekistan’s Primer Minister, Abdulla Aripov, met with his Tajik counterpart, Kokhir Rasulzoda, in the northern Tajik city of Khujand. The purpose of this encounter was to discuss a much more important visit: that of Mirziyoyev to Tajikistan in June.

The Uzbek’s president visit to Tajikistan will be his second since he took office in 2016. It was in March 2018 when Mirziyoyev made the first trip to neighbouring Tajikistan, with his Tajik counterpart, Emomali Rahmon, returning the visit in August of that same year. In comparison, Mirziyoyev’s predecessor, Islam Karimov, had only crossed the border into Tajikistan for an official visit once in his 25 years as Uzbekistan’s president.

The relationship between Uzbekistan and Tajikistan has been a tense one since they both gained independence from the Soviet Union. Above all, this was due to the animosity between both presidents, Islam Karimov and Emomali Rahmon. Despite the former supporting the latter during Tajikistan’s civil war (1992-97), things soon turned sour. In 1998 Tajikistan accused Uzbekistan of supporting a renegade commander who invaded northern Tajikistan, while Uzbekistan claimed Tajikistan was purposely harbouring the Islamic Movement of Uzbekistan (IMU). All this was followed by the planting of land mines by Uzbekistan along its border with Tajikistan, as well as with Kyrgyzstan.

Back in 2009, Rahmon went as far as to reportedly claim that he and Karimov had fought twice, with Kazakhstan’s Nazarbayev and Ukraine’s Kuchma having had to act as peacekeepers between them. A few years later, in 2012, Karimov made what can be understood as a veil threat mentioning the possibility of a war for water taking place in Central Asia. This statement related mainly to the construction of the Rogun dam in Tajikistan that Tashkent claimed would disrupt water supplies downstream.

Those who have suffered the most with this rivalry have been the ordinary citizens of both countries. As is the case all over the region, a large number of families have relatives at the other side of the border. Despite this, flights between the capitals Tashkent and Dushanbe were cancelled in 1992 due to the Tajik civil war and did not resume until 2017. Similarly, a number of border crossings remained closed. It is worth highlighting that Uzbekistan has a large Tajik minority since its borders were drawn by the Soviets in the 1920s and 30s, with Samarkand being the best example of a town with a large Tajik population that was allocated to Uzbekistan. As a matter of fact, before Tajikistan became a Socialist Soviet Republic (SSR), it was an autonomous republic within the Uzbek SSR.

A reset in relations

The rise to power of Mirziyoyev in Uzbekistan changed this trend. As part of a wider foreign policy approach that aims for a greater regional collaboration between its neighbours, the relations between Uzbekistan and Tajikistan have improved significantly.

A few weeks after Mirziyoyev took over the presidency, the Uzbek FM visited Tajikistan with the aim of “resetting relations”. That such a trip happened in the first weeks of Mirziyoyev’s rule is quite telling as to where his priorities laid in respects to Tajikistan. What followed in the following years were a number of positive steps in that direction: from the announcement that Uzbekistan would no longer oppose the construction of the controversial Rogun dam to the resumption of flights or the opening of closed border crossings, besides the aforementioned state visits.

As a result, trade between the neighbours has increased significantly, from a mere $13 million in 2014 to $287 million in 2018. Similarly, Uzbekistan has resumed buying Tajik electricity while in 2018 Dushanbe resumed importing Uzbek gas, something which it had stopped doing in 2012.

The same has happened in terms of security. Since the Uzbek Minister of Defence’s visit to Tajikistan in 2017, both countries have been carrying out annual joint military exercises. This represents a significant change, from implicitly talking about wars to carrying out military drills together.

For all his shortcomings in domestic politics, from backing authoritarian officials to lack of LGTB rights, Mirziyoyev must be acknowledged for this positive change. Since taking over, he has sought to improve ties not only with Tajikistan but with rest of the Central Asian republics. This in turn is encouraging a new regional dynamic. The recent meeting of the Uzbek, Tajik and Kyrgyz governors of the Ferghana valley, which focused on improving local business links, is a consequence of such attitude. The improvement of Tajik-Uzbek relations are not only welcomed news for citizens in both countries but for Central Asia as a whole.

0 comments on “Tajik-Uzbek relations, from fists to handshakes”