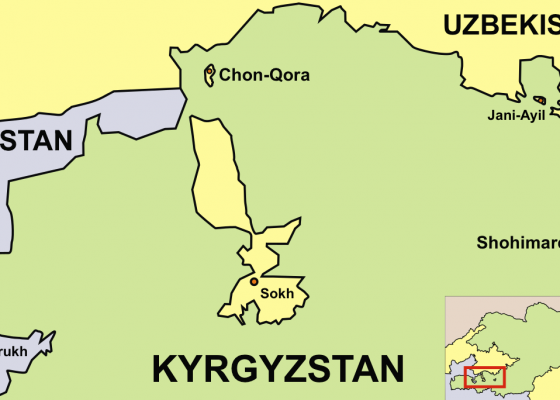 Since the spring 2021 clash between Tajikistan and Kyrgyzstan, the situation along the border continues to be unstable and we have now grown accustomed to reports of shootings and casualties. Despite last year’s conflict, the key issues remained unsolved.

Almost every month. That is the frequency of incidents involving shots, and even mortar fire, between Tajik and Kyrgyz border forces in 2022. In the best cases, no casualties are reported. In the worst, we are informed of deaths and mass evacuations. One year after the deadly clashes that left 55 dead and over 200 injured, the risk of a major confrontation continues to loom over this part of Central Asia.

January was an eventful month in the region as a result of the protests that shook Kazakhstan. Just as the smoke had cleared in Almaty, a clash erupted along the Tajik-Kyrgyz border. As usual, both sides blamed each other for the incident, which left two Tajik civilians dead and led to the temporary displacement of 24,000 Kyrgyz. Bishkek accused Dushanbe of using mortars and grenade launchers, while the Tajiks said the Kyrgyz had violated their airspace with drones. In the end, a cease-fire was reached.

Less than two months later, on March 10, another incident arose. In this case, it was in Tajikistan’s Chorkuh municipality. A verbal altercation between border guards from both countries was followed by an exchange of gunfire that killed a Tajik guard and injured two others.

The following month, on April 12, two successive shootouts took place near the Kyrgyz village of Maksat. A first shooting was followed by a second one while talks were taking place to defuse the situation.

June has so far been the scene of two separate incidents. On the third day of the month, while Tajikistan’s president was on an official visit in neighbouring Uzbekistan, shots were exchanged once again close to the Tajik enclave of Vorukh. Then on June 14, another skirmish left a Tajik conscript dead in Vorukh.

The need to learn from the past

The border between Tajikistan and Kyrgyzstan has been the scene of conflicts between both countries since their independence over three decades ago. However, the intensity and occurrence of armed incidents have increased significantly in 2022. This year we have witnessed violence erupt along the border on five separate occasions, or six depending how we account for the April shooting.

The April-May 2021 clashes should have been a wakeup call for Tajik and Kyrgyz authorities. What started as a minor local altercation related to water distribution quickly scaled up to something significantly more serious. What prevents something like that from happening again?

Minor progress was made on the border demarcation following last year’s unrest. A joint protocol was signed shortly after and in February this year a joint commission started working on the topic. Yet roughly half of the 971 kilometres of the Tajik-Kyrgyz border remain undefined. And then there is the complexity added by the exclave of Vorukh, an island of Tajik territory surrounded by Kyrgyzstan.

Despite the cease-fires, protocols and the joint commission, clashes have continued to take place along the border. Talks between local governors and commanders usually follow straight after the shootings this year to avoid an escalation of violence. But these actions are mere patches that do not solve the core issue nor do they prevent similar incidents from happening in the near future.

While little progress has been achieved to peacefully settle the border disputes, both countries have been more successful at arming themselves since last year. Kyrgyzstan, which got off worse in the spring of 2021, soon purchased Turkish-made Bayraktar drones, as well as armoured SUVs for its border service. Tajikistan also looked towards Turkey and, to Bishkek’s displeasure, this year some reports indicated it had bought the same drones. However, in the end Dushanbe will produce Iranian Ababil-2 drones.

There is nothing wrong with Tajikistan and Kyrgyzstan updating their weapons stocks, including the purchase of unnamed aerial vehicles. They are sovereign nations, and it is their right to defend themselves. The issue stems for the reason behind such rearmament. While Tajikistan can always justify it by citing Afghanistan and the militant groups that operate along there, there are no guarantees the new weaponry will not be used in an eventual conflict with Kyrgyzstan. The same applies to Bishkek, although they do not have the same Afghan factor.

If things do not change in the delimitation of the border and the improvement of relations between both countries, both of which seem unlikely with the current political leadership, violent encounters along the Tajik-Kyrgyz border will continue to take place. Monthly shootouts are becoming a regular event, with the risk of escalation to a larger scale conflict as in 2021. This seems to be the unfortunate ‘new normal’ in the border between Tajikistan and Kyrgyzstan.

0 comments on “The ‘new normal’ along the Tajik-Kyrgyz border”